Male Celebrity Cross-dresser: Matt Lauer Wearing Women’s Clothes. What do Jimmy Fallon and Matt Lauer have in common? They are both television personalities, they work for the same network (NBC) and, most importantly, they have a thing for wearing women’s clothes. You can Fallon as a cross-dressing enthusiast in an earlier post: Jimmy Fallon Shirtless and Underwear Photos. As for Matt, well, here he is as Pamela Anderson on Baywatch. 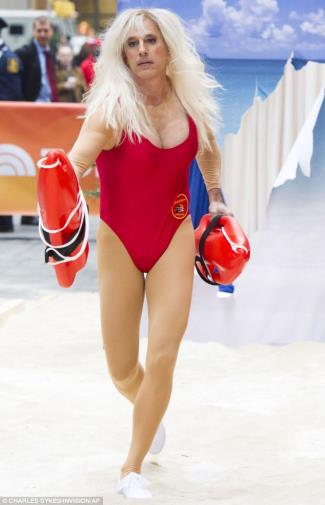 The Today Show host as Jennifer Lopez with Al Roker as her/his Puff Daddy aka P. Diddy aka Sean Coombs. 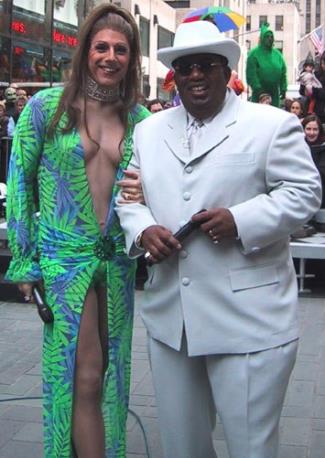 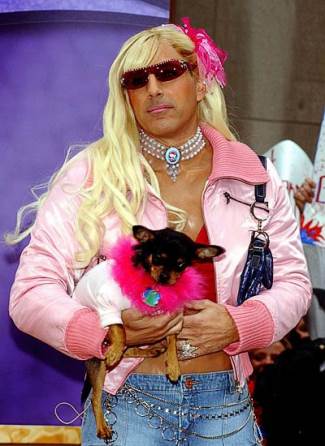 Here is Matt playing the role of Hoda Kotb when he guested on Ellen. 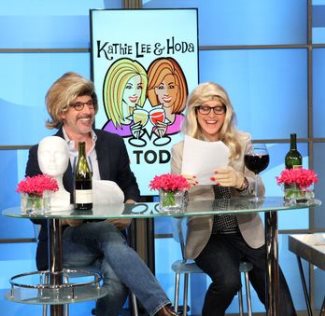 Question to you fellow Famewatchers: Are you starting to like Matt Lauer again? Although we still blame him for what happened to his former co-host Ann Curry, we must admit that we are starting to kinda, sorta like him again. Okay, maybe we do not totally like him but we are disliking him less. It’s his bit as Pamela Anderson as well as his guesting on Ellen and Jay Leno are what make us “thaw” on him.

On Ellen’s show, he tells us how he pulled off his Baywatch look. From the ET Online:

“We have a team,” he said. “It’s like Dorothy in the Wizard of Oz. I mean, I sit in the chair. We’ve got the Today show wardrobe people. We have Saturday Night Live people. We’ve got prosthetic people, so what I do is I sit in the chair and I’ve got people buzzing around me. I’ve got one person doing make-up, one person doing hair, another applying the appendages. And, then I don’t look in the mirror until the transformation is complete because I want to be surprised. And, I was surprised.”

It only took “about 30 minutes” for Matt to go from journalist to Baywatch beauty, but he said “the hardest part is putting on the device.” Meaning? “The device that um, it’s called a concealer is what it is,” he explained. “If they use the name that’s more appropriate—if described it like, ‘It’s a testicle vice,’ then I probably wouldn’t have used it.”

Matt went on to describe how this concealer (aka the testicle vice) was put into place. “You get n*ked,” he said. “So I’m in the dressing room and I get naked and then you put this thing on. I’ve never put Spanx on but I would imagine it’s sort of Spanx times ten. And it’s intentionally 20 sizes too small.”

Want to see what a concealer looks like? Fast forward to 2:40 in this video where Matt “gifts” his concealer to Jay Leno:

Want your Matt as a man rather than as a cross-dresser? Check out our earlier post on him: Matt Lauer Shirtless Photo.