Absorbent Underwear For Men: Denver Hayes Dri-Wear Underwear. When we came across the photo below, we initially thought that the male model is wearing Calvin Klein boxers underwear. Upon closer inspection however, it turns out that he is wearing an underwear label we’ve never heard of before. It’s called Denver Hayes and its made by a Canadian apparel brand Mark’s. 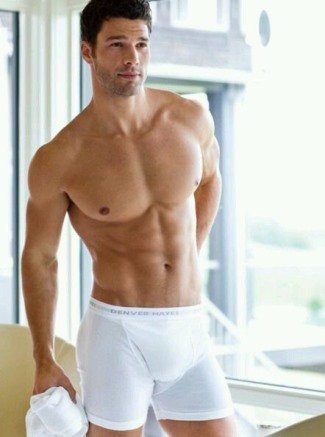 More about this label which could probably be described as a non-sweaty mens dry underwear. From a Denver Hayes media release back in 2012:

Unlike most men’s underwear, the new Denver Hayes underwear help body sweat evaporate quickly and promise a more comfortable feel with the design of the product. Mark’s is well-known for bringing new innovation to traditional and comfortable menswear – making it the leading casual menswear retailer in the country.
…
“We are continuously looking for ways to create superior products that rate high on the quality and comfort scale and solve some of life’s little problems,” says Iain Summers, General Merchandise Manager at Mark’s. “We want Canadian men to expect more from their underwear and we believe we have found the answer in Denver Hayes with dri-Wear.”

It’s been three years since this Denver Hayes dri-Wear absorbent underwear for men was introduced to the world so it would be interesting to know among those who tried the label whether is as good as described. Does it really help keep you dry?

Anyhoo, here are some interesting info bits about men’s underwear which Mark’s claims to have found from a Canadian national survey it commissioned:

Male Famewatchers, does any of the above findings apply to you? Also, do you know of any absorbent underwear for men like the Denver Hayes dri-WEar that you can recommend to your fellow UnderwearWatchers? If you do, do tell in the comments.

By the way, for those who are wondering, the hunky and gorgeous hunk in the photo above is model actor Aaron O’Connell.