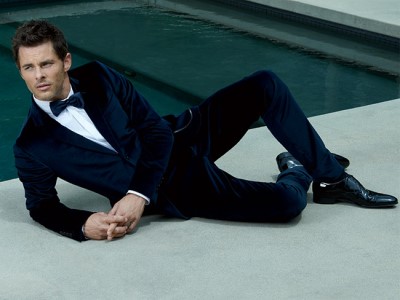 James Marsden Sexy in Mens Suits. We’ve asked this before and we’ll ask it again: Why is James Marsden not a bigger star than he currently is? His beauty and gorgeousness is equal to either Brad Pitt or George Clooney. He is a better actor than supposedly “A List” stars (we’re looking at you Shia La Beouf and Ben Affleck). And, like your old-school Hollywood movie star, our James  smolders, sizzles, dazzles, and looks dapper in a suit which is why the LA Confidential Mag got him to be their coverboy in their latest issue. 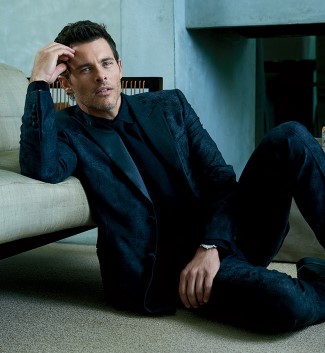 Is James Marsden Gay or Straight? He is “quite straight” according to the denizens of gayorstraight.com. Here’s their gaydar rating for the X-Men actor:

James is certainly confident in his straightness and masculinity such that he doesn’t mind doing a gay role and kissing a dude in the person of another hunk, Jesse Bradford. [Want to see Jesse Bradford’s Underwear and Shirtless Pics?]

Here’s a video of the “James Marsden kisses Jesse Bradford” gay scene in the 2005 movie, Heights.

Here’s some screencaps courtesy of ohlalaparis.com: 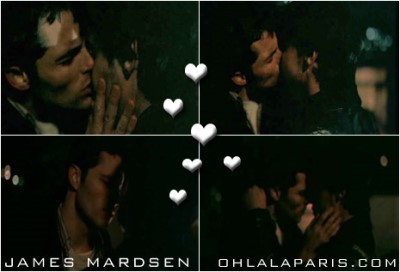 James Marsden Girlfriend. Now that we established James’ straightness, does he have a girlfriend in 2014? Is he dating anyone? Or is he married?

Rumor has it that James is currently dating The Vampire Diaries actor Nina Dobrev. Famousfix.com, from which we got the preceding rumor, also lists the following girls as James’s exes: Lisa Linde, Katie Holmes, Rose Costa, and Cherie Thibodeaux.

Way to go, Jimbo! If you are as good looking as James, you are doing humanity a favor by spreading your genes around, right?

Want more James? Check out an earlier post we wrote about him, James Marsden Underwear.