Naveed Choudhry Shirtless, Underwear, Gay or Girlfriend? Are you a fan of Naveed Choudhry? If you watch Waterloo Road, we won’t be surprised if you are. The dude’s a talented actor and he’s been winning fans left and right ever since he joined the series as Tariq Siddiqui. Naveed must have done a good good of embodying his role such that he admits to responding to the name “Tariq”.

In an interview with Digital Spy, he talks about how Waterloo Road compares to his acting work in the past: “It was by far the biggest show that I’d done. The exposure that I’ve had on Waterloo Road, and the feedback that I’ve had from old ladies to young kids, has been overwhelming. Until you actually get on the show and it airs, you don’t realise how popular it is.”

He adds: “It’s crazy, because I respond to the name ‘Tariq’ now! I hear ‘Tariq!’ and I have to check whether someone is calling me. It’s so overwhelming, and I couldn’t have asked for a better job to find my feet on.”

It is not clear whether Naveed is going back to the series but he’s keeping his fingers crossed he’ll continue to find work in the industry.

On his future plans (via Digital Spy): “When you’re on a show like Waterloo Road, you’re on such a high – and then you come off it and you’re just waiting for the phone to ring! I’m just playing the waiting game at the moment, but fingers crossed it won’t be for too long. If there are any writers, directors or producers out there who want to work with me, by all means I’m willing to sink my teeth into some meaty projects, so give me a call!”

Naveed Choudry Shirtless in Gay Movie. We hope he does continue to get good projects in the future because it would be a waste of talent if he does not. Anyhoo, long before mainstream fans discovered Naveed’s talent on Waterloo Road. Some gay fans, like our friend Kevin, have already took note of it in the 2010 short film, Protect Me From What I Want, where he played the role of a gay Muslim who hooks up with Elliot Tittensor‘s character. 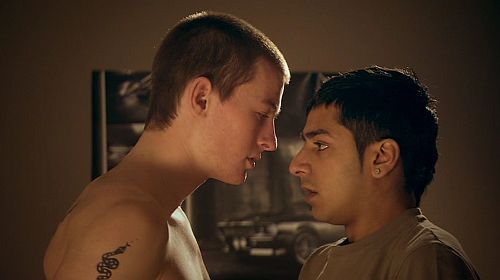 Is Naveed Choudhry gay in real life? If not, does he have a girlfriend? Our answer: We don’t know. If you do know, do tell in the comments.