Since we just blogged about a sexy European football hunk six days ago (see Nacer Chadli), we were not planning to write another post on a footballer. But then when we were watching Wendy Williams’ Hot Topics, she mentioned that Rihanna got herself a new boyfriend. His name is Karim Benzema. He is a footballer from France. And the two apparently first got in touch through Twitter.

While Wendy yakked about Riri’s new squeeze, our mind went, “Is he cute? Does he look good in a Speedo like most Europeans? Is he a good ball player? Does he have a scandalous past? Does he have sexy shirtless photos Deena and Kevin will drool over? And, does he prefer boxers or briefs underwear?”

Naturally, we went searching for answers to said questions and these are the answers we found:

Karim Benzema Shirtless. Yes he is cute. And yes he has droolworthy shirtless photos. Like this one: 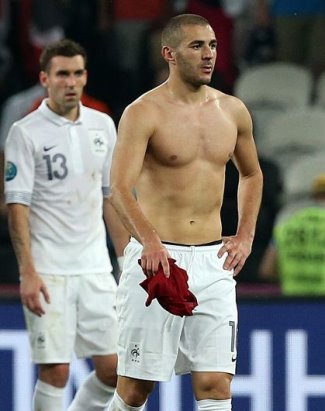 Karim Benzema Speedo. And he sure looks good in a Speedo. Check him out:

Too bad we can’t get better images of these Karim Benzema Speedos, no? [Our friend Deena told us to stop calling swimsuit “Speedos”. She says that if you look at Karim’s swimsuit, it’s actually made by Adidas rather than Speedo.]

What about the Karim Benzema underwear? Does he like boxers or briefs? Maybe he wears a thong? Hehe. Well, here’s what we dicovered. When it comes to underwear brands, it looks like he wears Pull-In underwear, the French underwear brand we also saw on Robin Van Persie. 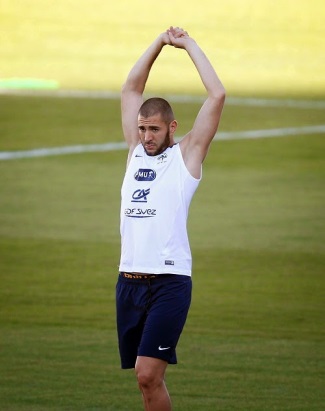 Update: Yup, he wears Pull-In underwear as you can see in the photos below. And get this, he wears neither briefs nor boxers but a combination of the two: boxer briefs. 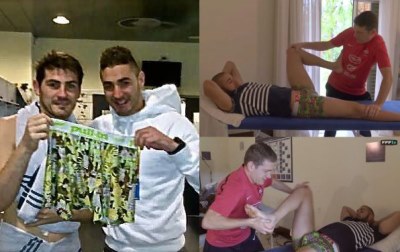 Now, does Karim have some saucy scandal hidden somewhere? Maybe he’s got a love child he’s not supporting despite his footballer salary? Or maybe he is one of those rumored gay footballers and he is using Riri as his beard?

Well, he does have a scandal behind him but its neither of the above. It involved allegations that he paid for s*x with an underage pr*st*t*te (16 years old at the time alleged). After the trial, he was cleared of the charges against him. Apparently, you can’t be convicted for the crime alleged if you did not know that the person is underaged. So Karim has got a clean slate.

Let’s end this post with this photo of Karim sizzling in his all-white suit.