Are you watching the drama/dark comedy series, UnREAL, on Lifetime? We are not. Not yet anyway. But we keep on hearing good things about it. Vulture calls it “one of the most interesting dramas in recent memory” while Time Magazine says it is “melodramatic and moralizing. But it’s also … pretty good: dark, deft and empathetic”.

Now, if that’s not enough endorsement for you, check out this review from Homorazzi.com:

YES there are hot men in this. The gay character is too wimpy and too fay for me so I’m gonna have to take a hard pass on him. The “Bachelor” himself while cute is too much a dick this early in the show for me to appreciate beyond his British accent and cute smile. BUT, the real steam comes from camera man Josh Kelly who gets nothing more than a black t-shirt and yesterday’s hairdo to run around with and that does him JUST fine. Honestly, this guy is worth watching alone for.

Josh Kelly UnReal Shirtless and Underwear Photos. Of course, we were intrigued enough by the raving for Josh Kelly so went googling for what the fuss is all about. Well, the Google gods returned this images of Josh looking effable in his boxer briefs underwear. 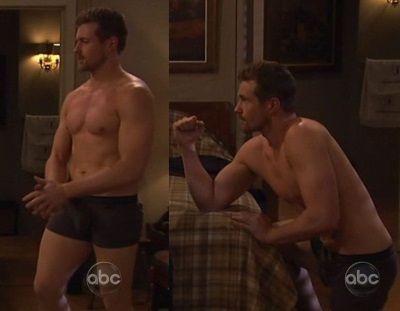 These images are still photos from an episode of One Life To Live, a day time soap which was cancelled in 2013 after 43 long years. Josh played the role of Cutter Wentworth in said soap opera.

Anyhoo, let’s end this post with this video of an episode of One Life to Live where Josh wears nothing but a pair of squarecut swim trunks. Watch:

You didn’t think we’d simply watch the video without making a screencap, didn’t you? 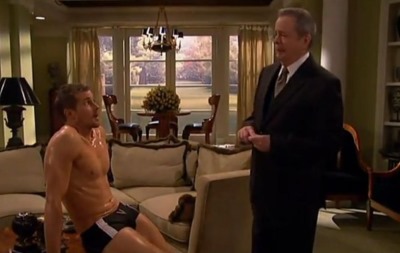 Hopefully, we’ll get some Josh Kelly UnREAL scenes and photos like this in the upcoming episodes of his newest TV show, no?