Patrick Flueger Shirtless Photos. We were planning to include these photos in our earlier post on Patrick’s Chicago P.D. jackets but said post was getting too long so we think its best to do a separate post on the shirtlessness of Patrick John Flueger.

Well, check out these still photos from the TV series, Scoundrels, where Patrick gets to play twin brothers. Unfortunately, the comedy drama lasted for only one season so we didn’t get more Patrick Flueger shirtless pics. 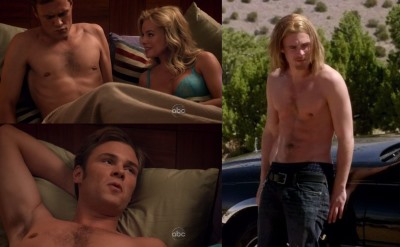 But we do have this Patrick Flueger underwear photo. We see England, we see France. We see Patrick’s underpants. We also see an older Patrick lifting his shirt for whatever reason!

If you know the story behind the image of Patrick in his underoos, then do tell in the comments. We’re pretty sure its from one of his many roles — 31 acting credits to date according to IMDB — but we don’t what for what movie or TV project. Update: The underwear photo is from the 2009 movie, The Job.

Here are other underwear pics, this time Patrick is in his briefs and boxers, from the 2007 movie, Spin.

Of course we won’t end a post about a celebrity without asking the gay question: So Is Patrick Flueger Gay or Straight? Well, he is a kissin’ buddy of Chris Lowell but Patrick is a straight dude. 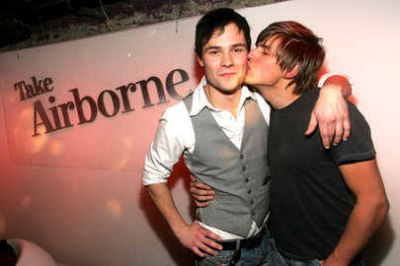 According to famousfix.com, Patrick dated Briana Evigan and Carly Pope. We don’t know if he is dating anybody now.

Anyoo, here’s Patrick’s gaydar rating as scored by the denizens of gayorstraight.com:

Update: Did he ever come out as bisexual in the past? We are gobsmacked by this comment on his IMDB forum page which says he did:

thunderokc: While watching The 4000, I’ve done some reading on you. I’m so proud that you decides to come out as Bisexual and advocate that its a-okay and just as normal to appreciate both genders and finding them equally attractive. The interview you gave on this was just fantastic! I do hope that your true love will be a fantastic dude! Keep doing the good things that you do.

Maybe thunderokc misunderstood something that Patrick said. Seems like English may not be thunderokc’s native language so let’s put this down to a misunderstanding or a misinterpretation.

Let’s end this post with this photo taken and published at a time when Patrick was starring in the TV series, The 4400. 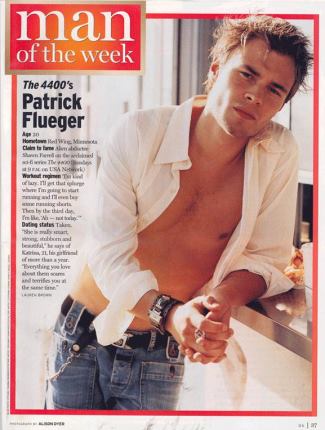 In the printed interview, he mentions that he has a girlfriend named Katrina.