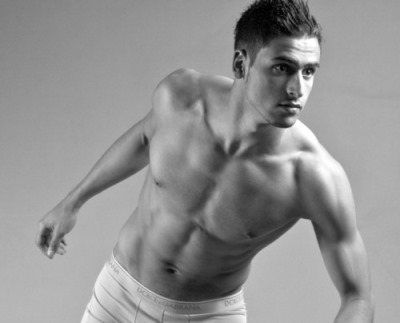 We looked for the story behind these photos — does he have a sponsorship deal with Dolce & Gabbana like Lionel, is he modeling for a D&G ad campaign, or is this a magazine editorial shoot — but we can’t find any information. Maybe you can tell us why our gorgeous football star choose to pose in his Dolce undies?

Damn! What a body! How does he keep himself fit like that?

What do you think of his Nike muscle shirt? 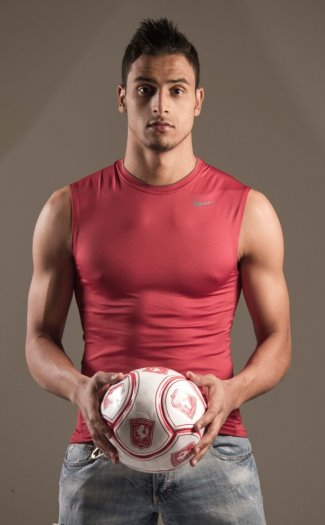 Nacer Chadli Poses for Cosmopolitan for Cancer Research. If we are clueless about Nacer’s D&G photoshoot, we are thankfully informed on why he is posing au natural in the next photo below. He’s doing it to support Cosmo Magazine’s Everyman campaign to raise male cancer awareness.

Here’s what he says about posing for cancer (via Cosmopolitan Magazine):

As a footballer, my body’s my tool – so I have to take care of it, and I’m pretty happy with the way I look and what my body is capable of – sometimes I’d like more muscle or bigger legs, but you can never be perfect. My weakness is definitely chocolate – Belgian obviously.

I’ve never posed n*k*d before, but I’m not nervous – maybe I should wait and see what the reaction’s like! It’s an important cause – cancer affects lots of families, so I hope it gets people talking.

Is Nacer Chadli Gay or Straight? The denizens of gayorstraight.com seem to think he is gay as they gave him this gaydar rating:

Nacer Chadli gaydar: According to 40 visitors Nacer Chadli is 76% gay. The average gay-rating on gay-or-straight.com is 69%, which means Nacer Chadli has been voted highly gay.

Our Belgian/Moroccan hunk is actually straight. He is single at the moment but he had girlfriends before. In fact, he has a daughter with an ex. Here’s Nacer with daughter Sarah. 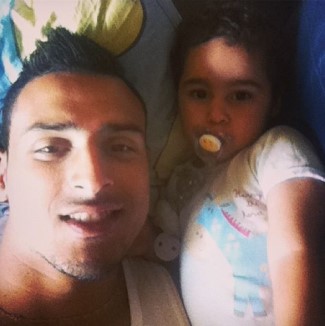 Let’s end this post with this quote from an article on the Independent where Nacer talks about his new diet protocol:

They gave me advice, and I don’t drink milk any more. Only sometimes soya milk. And I don’t eat cheese.

I eat a certain amount of fruit and vegetables, and it is better to eat fruit before a meal. Normally, I was eating fruit after as a dessert, but it is better to eat it before. I am allowed to eat meat one or two times maximum a week, and for the rest a lot of fish and chicken. I think it has helped me. I lost a bit of weight.

So who says a man loses his hunkiness if he does not drink milk? Certainly not us after looking at how Nacer Chadli is every inch a hunk.