Grigor Dimitrov Underwear and Shirtless Photos (Posted July 2014). Our Bulgarian hottie continues to rise up the ranks and, in fact, has just knocked out Andy Murray from this year’s Wimbledon. We didn’t know who to cheer for when we were watching the match.

On the one hand, we’d like Murray to defend his title. But, on the other hand, we want up-and-coming young ones like Dimitrov to do well and eventually have grand slam titles of their own. Anyhoo, these two may be rivals on court but they are, apparently, cool with each other off court. Check them out chilling at this year’s Australian Open. 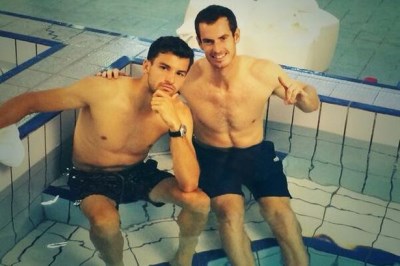 By the by, speaking of tennis up-and-comers, go check out our post on the biggest revelation this year, the quote-loving Aussie/Malysian/Greek hunk that is Nick Kyrgios. 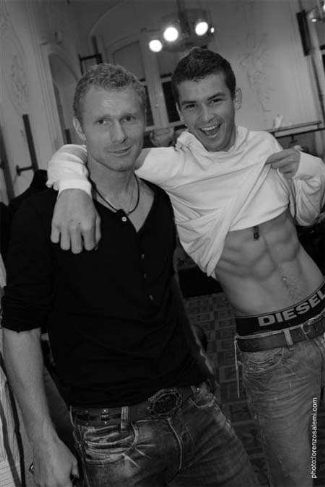 You’re learning well from the master Dmitry Tursunov, eh? [See our post on Dmitry Tursunov’s Underwear.] Or maybe its them well-sculpted washboard abs that you are showing off, eh? Well, we don’t mind people who show off so long as they have something to show off. Grigor passes the test because look at them abs. We’d like to nominate him as the guy with the best abs in tennis. If you know anyone who can beat our Grigor, do tell us in the comments. 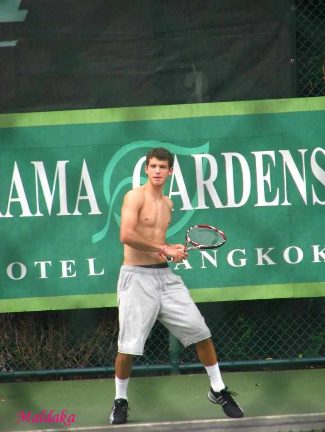 Who wants to play ball with our Bulgarian hunk?

Another Grigor Dimitrov underwear peekabo shot. What a gorgeous, gorgeous guy. He reminds us of the retired Russian tennis hottie that is Marat Safin. 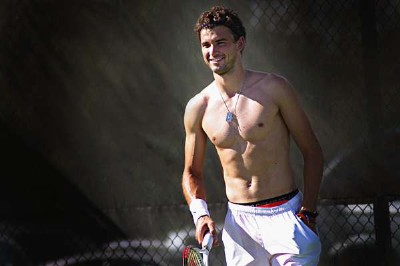 Is our Grigor trying to be a kickboxer like our other tennis imaginary boyfriend Jo-Wilfried Tsonga.

By the way, did you read the news that our Grigor is dating Maria Sharapova. From Sports Illustrated:

According to ESPN’s Darren Rovell, Maria Sharapova is now dating Bulgaria’s No. 1, Grigor Dimitrov. Asked about Rovell’s report, Dimitrov issued the standard non-denial. “I never talk about my private [life]. Sorry,” he told reporters in Australia.

Speculation about the possible pairing began in November when the 21-year-old Dimitrov was seen walking with Sharapova and her team in Milan, where Sharapova was scheduled to play an exhibition. There was smiling and giggling, and Dimitrov even cheekily offered Sharapova one of his (her?) Sugarpova candies.

Ugh. Ugh. Ugh. Maria is too old for him. What is she, a cougar? Okay, maybe its unfair to call her a cougar because she’s 25 to his 21 but she should find someone older. You know, someone as old as Anna Kournikova’s Enrique Iglesias. Lay off our Grigor, Maria! Hehe.