David Muir Shirtless, Cosmetic Surgery, Gay or Straight (2020 Update). We are updating this post we published six years ago in June 2014 to bring you this shirtless photo of ABC World News Tonight anchor David Muir. Cool, no? Cool, cool, cool. We’ve been watching too much Community as you can tell. 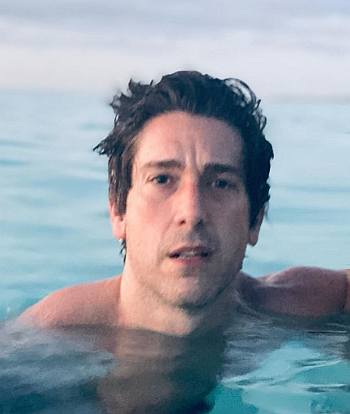 …..
David Muir Shirtless, Cosmetic Surgery, Gay or Straight (posted 26 June 2014). By now, if you are a MediaWatcher, you would have heard the news that award-winning TV journalist David Muir has been named as the incoming anchor for ABC World News. He will replace Diane Sawyer who decided to retire. Details from syracuse.com which is understandably proud of its native son:

ABC News star Diane Sawyer will be stepping down from her role as anchor on ” ABC World News” this September. She will be replaced by “20/20” co-anchor, former WTVH-5 anchor and Syracuse-area native David Muir. Muir anchors the “World News” weekend edition, and will be stepping into a role Sawyer has filled for five years.
…
David Muir will officially take over as Anchor and Managing Editor of “World News” on September 2, 2014.

Muir is a Central New York native and a graduate of Onondaga Central High School and Ithaca College. He got his start in news in Syracuse as an anchor at WTVH-5 from 1995-2000.

He has been on the rise at ABC News, where he has reported from around the world and appeared on air more times than any other network correspondent.

Muir’s Emmy-nominated “Made in America” series features reports on U.S. companies that create jobs in America.

“David has made his reputation reporting from the ground on every big story of recent times, and we know that when big stories happen, wherever they happen, David will be there for us and for our audience,” said Goldston. “I am thrilled he is taking the helm at World News.”

David Muir Shirtless. Does this news got you curious to see a shirtless photo of David? Hehe. Unfortunately for you, there ain’t any (well, obviously, there are but we think he’s keeping it private. Still, an enterprising superfan of the news hunk came up with this fake David Muir shirtless photo: 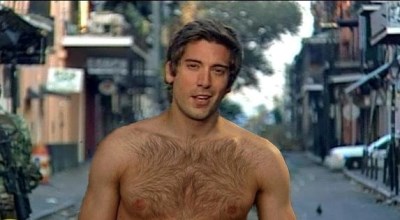 Pretty good photoshop, no? Kudos to whoever made it. [For a shirtless pic of an ABC News hunk that ain’t fake, check out this George Stephanopoulos Shirtless Photo.]

David Muir Plastic Surgery. Did David have some surgery in the past to enhance his looks? A website, Plastic Liposuction Surgery Guide, alleges that he had several cosmetic surgeries. They’re basing their conclusion on the supposed changes in David’s looks from when he was younger to when he got older. 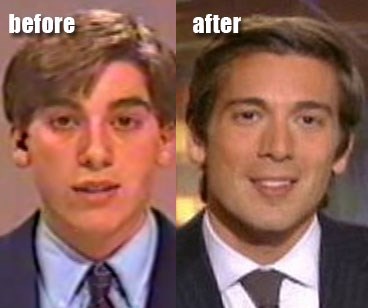 David Muir was pretty dorky looking in college. Now, after a few rounds of plastic surgery, he is hot. I suspect he’s had his ears pinned back, plus gotten rhinoplasty, veneers, a chin implant, jaw implants, and cheek implants. In the before picture, he face looks flatter. Now, it is more built out and sculpted. Buying ‘pretty’ is not just for girls. His plastic surgery is very subtle and done extremely well. (Is that why he looks so smug at times?)

Our take on this cosmetic surgery allegations? Ehhh, maybe he just grew up! People change when they grow up. It is the people whose looks don’t change that we should be suspicious off, right?

David Muir Relationship: Does He Have a Girlfriend/Boyfriend. At the ripe old age of 40 (okay that ain’t really old is it?), our David reportedly does not have a wife or girlfriend. This leaves the field open for gossip mongers and speculators (we’re admittedly guilty of this) to wonder whether he is gay, straight, or bisexual. What do our friends at gayorstraight.com think? Well, here’s their gay-o-meter reading:

gay-o-meter/gaydar for David Muir: According to 187 visitors David Muir is 77% gay. The average gay-rating on gay-or-straight.com is 69%, which means David Muir has been voted highly gay.

Do you agree with the above assessment? Anyhoo, some peeps are linking our David with another Famewatcher crush from ABC News, Cuban hunk Gio Benitez [see Gio Benitez Shirtless]. Why are they linking the two? No proof really, it’s just that Gio does his report in the studio when David is the anchor. From Hotspot Magazine:

Neither of these men are openly gay, but have been linked together after a series of coincidental appearances on ABC World News. Eagle-eyed viewers claim that Gio usually files his reports to Diane Sawyer from the field. But when Muir fills in as anchor, Benitez miraculously appears in the studio. Coincidence? Gio recently said that Muir is one of his top three “Golden Followers” on Twitter.