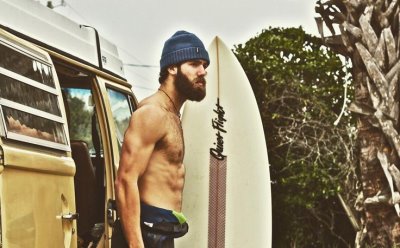 Daniel Norris Shirtless. Today in celebrity chest hair, we bring you Daniel Norris, pitcher for the Toronto Blue Jays. Daniel made headlines last March for his simple lifestyle which is unheard of in the world of pro sports. Apparently, he has decided to live in a van despite the fact that he’s got a $2million signing bonus when he signed a deal with Toronto.

Here’s an excerpt from an ESPN story, The Man in the Van, which gives us a picture of Daniel’s lifestyle choice:

This is where Norris has chosen to live while he tries to win a job in the Blue Jays’ rotation: in a broken-down van parked under the blue fluorescent lights of a Wal-Mart in the Florida suburbs. There, every morning, is one of baseball’s top-ranked prospects, doing pull-ups and resistance exercises on abandoned grocery carts. There he is each evening, making French press coffee and organic stir-fry on his portable stove. There he is at night, wearing a spelunking headlamp to go with his unkempt beard, writing in his “thought journal” or rereading Kerouac.

He has been here at Wal-Mart for long enough that some store employees have given him a nickname — “Van Man” — and begun to question where he’s from and what he might be doing. A few have felt so bad for him that they’ve approached the van with prayers and crumpled bills, assuming he must be homeless. They wonder: Is he a runaway teen? A destitute surfer? A new-age wanderer lost on some spiritual quest?

The truth is even stranger: The Van Man has a consistent 92-mile-an-hour fastball, a $2 million signing bonus, a deal with Nike and a growing fan club, yet he has decided the best way to prepare for the grind of a 162-game season is to live here, in the back of a 1978 Westfalia camper he purchased for $10,000. The van is his escape from the pressures of the major leagues, his way of dropping off the grid before a season in which his every movement will be measured, catalogued and analyzed.

For some reason, this story reminds us of Canadian footballer Danny Watkins who made it to the NFL; he had a very bright prospect ahead of him but he left the game because he loved firefighting so much.

We’re not saying, of course, that Daniel will be like Danny and end up not fulfilling his potential in Major League Baseball. What we are saying is that both athletes are similar in the sense that their sudden fame and fortune have not blinded them to the joys of simple living. This is a very refreshing attitude in an age where sports stars burn money by the minute a-la Floyd Mayweather.

Anyhoo, we know you are interested in Daniel Norris shirtless photos, so here you go: 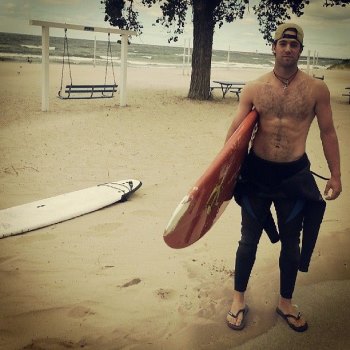 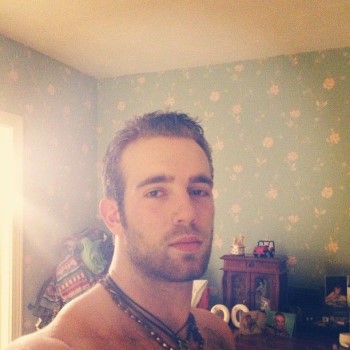 Awww, how cute is he? Isn’t he the kind of guy you’d like to bring home to mama? 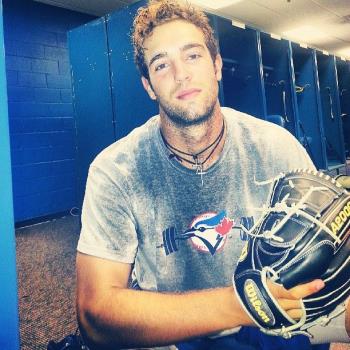 Daniel Norris Girlfriend: Is he dating at the moment? Does he have a girlfriend? We ain’t sure if she is dating anyone now but, according to ESPN, he “has had one serious relationship, with his high school girlfriend, and it ended in part because he wanted more time to travel by himself.”