Check out Brendon Urie shirtless in leather pants. Kind of cool but we can’t help but wonder how hot it might be for his jewels down there. Haha. 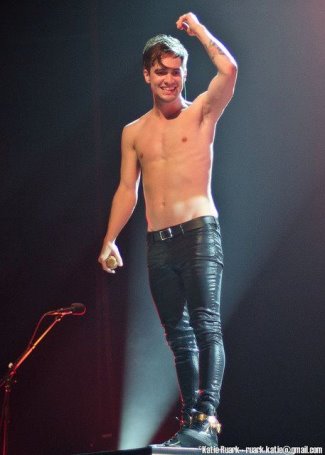 Brendon Urie Gay? How gay is Brendon? Well, we haven’t seen him gay-kissin’ a dude (unlike Luke who happens to be Blake Shelton’s kissing buddy), but here’s what he had to say about the gay rumors circulating about him (from pridesource.com):

Gay rumors about you have been circulating since the beginning of your career. And last year you tweeted, “Everyone’s a little gay.” Do you truly believe that for yourself and for other people?
Oh yeah, definitely. It’s natural. I find myself being attracted to dudes all the time. I’m like, “Wow, that’s a beautiful man.” There’s no shame in it; that’s how I feel. To stifle that would probably bring on stress and probably make somebody homophobic.

How do you label yourself sexually, then?
I guess if I had to classify myself, I’d say I’m straight. But I have, in the past, experimented in other realms of homosexuality and bisexuality. Overall I’m more attracted to women. Like with my wife, I’m just so insanely in love and attracted to my wife that I go, “Well, OK, my love of musicals can’t trump that I love p*ss*.” (Laughs)

A straight dabbler?
Yeah, sure. It’s fun to dabble!

Brendon Urie Wife. As mentioned in the above interview, Brendon has a wife. Her name is Sarah Orzechowski and the two tied the knot in 2013. Here’s a pic from their wedding: 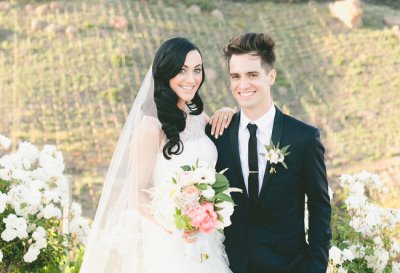 Brendon Urie Underwear: Boxers or Briefs? Based on the photos below, taken at Summerfest 2011 when Brendon decided to strip down to and perform in his undies, our Brendon likes to wear boxer briefs.

Let’s end this post with this photo of Brendon looking good in his fabulous leather pants and blazer combo! 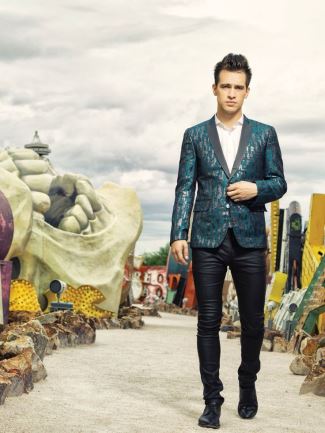