Don’t ask Charlie Day the “boxers or briefs” question because the answer is neither one of them. Neither is he a “going commando” kind of guy. So what kind of underwear does Charlie Day wear? It’s long john thermals, baby. Well, at least that’s what he usually wears in the hit TV show, It’s Always Sunny in Philadelphia. 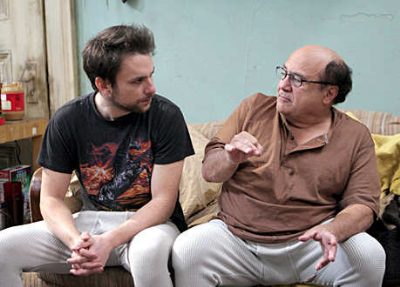 It must be noted though that both Charlie and Danny are not what you would call a “long johns exclusivist”. Charlie also apparently wears tighty whitie briefs just like his Always Sunny buddies Glenn Howerton (who plays Dennis Reynolds) and Rob McElhenney (who plays Ronald “Mac” McDonald). 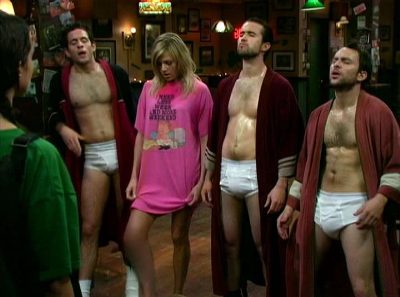 And our Danny is certainly not wearing long johns in the pic below. Do tell us he’s wearing briefs and that he is not going commando. 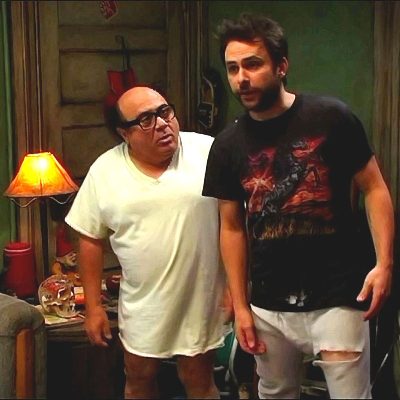 For the record, Charlie does not wear long johns in real life. From spin.com:

Do you actually sleep in those long underwear you wear on the show?
Well I don’t because I live in Los Angeles and that would be a little hot. But I just think people should be more secure with being comfortable. You’re just sleeping. You don’t have to be sexy. Scratch that, long johns can be sexy! I don’t work for the fine people over at the long johns company, though. I’m waiting for that endorsement deal. Any day now.

Haha. Wouldn’t it be cool if we have a really large billboard of Charlie on Times Square advertising long johns underwear. What about it, long johns makers? You are missing an opportunity here. Let us make Charlie the next big male underwear model a-la David Beckham. They, of course, should add Danny de Vito to the mix to make things more awesome.