We’ve seen her watch in Celebrities With Tag Heuer Watches, now let’s have more of Uma Thurman fashion style, shall we? But first, did you know that she is pregnant? We didn’t even know she’s got a boyfriend but she’s apparently dating a financier named Arpad Busson. Apparently, the two are kinda like Friends’ Rachel and Ross in that they got engaged, broke up, but then found themselves in each others arms again.

Anyhoo, here’s the couple with the very preggy Uma who is expected to give birth to a baby girl soon. The girl will be Uma’s third kid (she has a boy and a girl with Ethan Hawke) and it will be Arpad’s third as well (he has two sons with supermodel Elle Macpherson). 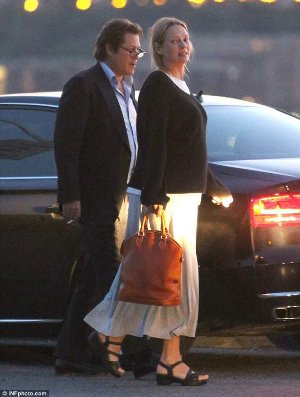 The next pic is Uma’s answer to the question, “Should pregnant women wear jeans?” Yes, they can! [Want more jeans for pregnant women?] 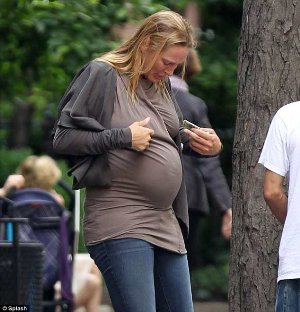 Now, time to check out Uma’s fabulousness on the red carpet. We’re not fans of blue dresses in general but we usually make exceptions and the Armani Prive long sleeve gown that Uma wore to the 2011 Cannes Film Festival is an one of those exceptions. We love, love, love it. 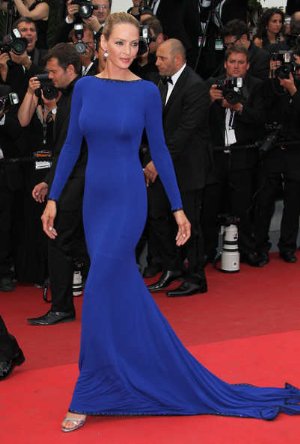 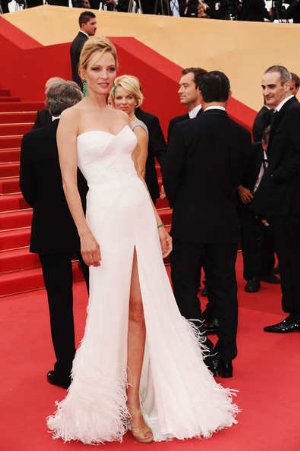 Uma in an Emanuel Ungaro jacket during an MTV award ceremony. 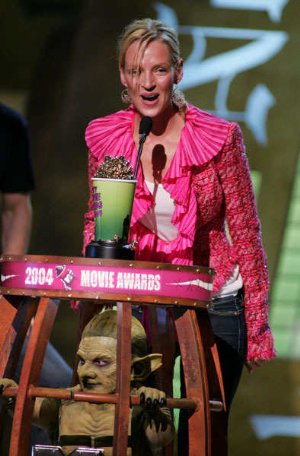 Like other celebrities, Uma loves her her Jimmy Choo shoes she’s seen wearing in the next photo below. She’s also wearing a Lanvin Resort 2011 double-breasted lame trench coat.

Who says only the young ones should wear two-piece bikini swimsuits? Not Uma who’s looking sexy in her outfit below. With a body like that, she sure puts lots of young ladies to shame, no? [Want more swimsuit for older women?] 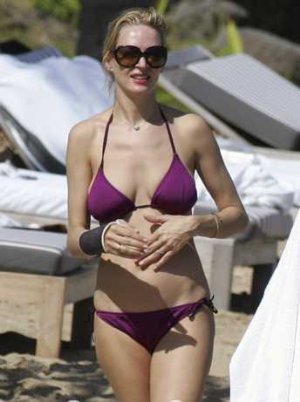 Uma goes casual in jeans and open sandals. Please tell us we’re not the only ones jealous of her Prada Mandarino and Nero Madras Leather Bauletto Bag from Prada’s 2011 bag collection? 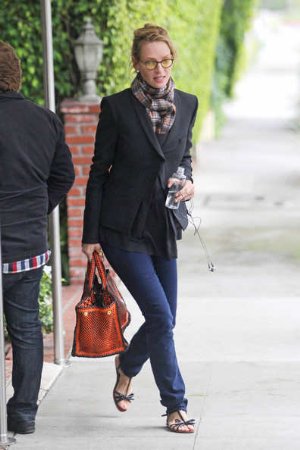 We love Uma as an actress and as a person but we love her best as Kill Bill’s Beatrix Kiddo. She is such a badass in the movie and we nominate her for the Most Badass Female Character of All Time Ever Ever. 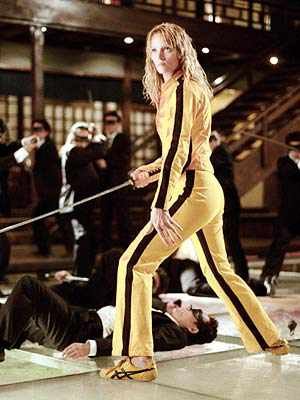 By the way, she’s wearing a pair of Asics Onitsuka Tiger Mexico 66 Sneakers.