Tyler Glenn Shirtless and Gay Coming Out. In an interview with Rolling Stone magazine, Tyler Glenn, lead vocalist for the band Neon Trees reveals that he is as gay as George Clooney. Okay, let’s not bring our Clooney into this because he is a) ghey only in the dreams of Teh Gheys like our friend Kevin or b) is only 2/3rds ghey (by his own admission, see Is George Clooney Gay?) who, to borrow the wise words of Amy Poehler, would rather float away into space and die than spend one more minute with a woman his own age. Hehehe. 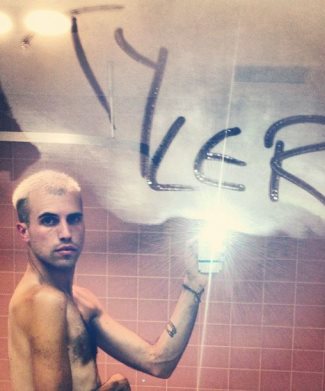 Anyhoo, going back to Tyler and his recent revelation that he is into dudes, here’s what Rolling Stone is reporting (you should buy a deadtree copy of the venerable mag for the full story): “Glenn says he’s known he was gay since he was a young child, but kept his sexuality a secret — until now. ‘I had my crushes on guys throughout high school, but it was never an overwhelming thing until my twenties,’ he admits. ‘Then I’d be dating girls and in love with my straight friend and it was the worst feeling in the world.'”

Although he’s coming out in public now, he actually started the process last year when he told family and friends about his sexuality. From Rolling Stone: “Glenn started to tell close friends and family members his big news in October 2013, as he was finishing up writing songs for Neon Trees’ upcoming third LP, Pop Psychology, many of which address his years in the closet.”

He’s apparently inspired by the coming out of young athletes like Michael Sam (see a Shirtless Michael Sam in His Underwear): “I really love all of the sports figures that are coming out recently. I appreciated Michael Sam was like, ‘I want to be able to go to the movies and hold hands with my boyfriend.’ Even hearing him say ‘boyfriend,’ I was just like, that’s cool.”

Tyler Glenn Boyfriend? Does Tyler have a boyfriend to hold hands and go to the movies with? We don’t know what his relationship status is at the moment but we’ll update this later once we find out if he is dating some guy and who that guy is.

Shirtless Tyler Glenn. Want another shirtless pic of our Mormon cutie? Here you go! The mothering instinct in us makes us want to feed him some hamburger… or something healthier.

If you are not familiar with Tyler and Neon Trees, here’s an interview he did with the Windy City Times:

WCT: Where are you all from?
TG: I am from San Diego. We are from all over the place. Brandon is from Las Vegas, Elaine is from Chicago, Chris is from there as well; we all met in Utah randomly.

WCT: The group is named after In-N-Out Burger’s neon sign?
TG: Me and my friends in high school used to hang out at In-N-Out. There was one particular one where I grew up. This one had a neon palm tree light. We were just joking around and thinking Neon Palm Trees would be a cool band name. Later on when we needed name for this band this just fit the aesthetic and look for it.

WCT: How do you feel about the song “Animal” being on Glee?
TG: I think it is cool. Glee brings back a focus to the arts in a clever way. I was a choir kid in school. I was outside the popular group. I am glad that it’s there for younger kids. I think it is hilarious. I don’t get to watch it as much as I want to but I am glad they covered our song.

WCT: Are you into ‘80s music?
TG: Yes, that was the music that really helped me find my voice and my look. It is the kind of music that I like. I think the music I grew up with was classic rock or punk. I liked music that had an edge and melody. I loved pop-art bands with that quality to them in the era of ‘80s and ‘90s.

WCT: Neon Trees seems to attract a wide range of fans, both young and old.
TG: We get all ages at our shows and all kinds of backgrounds. It’s weird because I wonder if they know who they are watching. I am this dorky, awkward and overly artistic guy dancing onstage. But they seem to love it and sing along. It makes me feel good because I sound like I am at home on this stage in front of these people. It has made my life better.

WCT: Were you or the other guys raised very strictly?
TG: We all were. I don’t know if “strict” is the word but we were all brought up in the Latter-day Saints church. My parents always encouraged me to question and figure things out for myself. I think because the family I was raised in I was brought up happy. I know I was really glad that I was brought up in this religious environment because a lot of my friends felt a little aimless. At the same token I can see how it can be oppressive for people to feel brought down and not able to be themselves. For me I loved my childhood and my upbringing for sure.