Tron Legacy Leather Jacket and Pants: Movie Fashion. From the shirtless Garrett Hedlund to the Tron motorcyle (see post below), let’s continue with our Tron Legacy movie coverage with these photos (courtesy of Stitch Kingdom) of the awesome replica leather suits used in the movie. 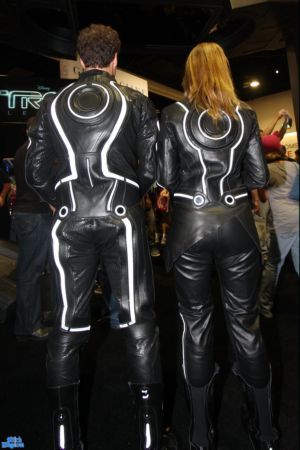 Stitch Kingdom notes that these are not just costumes for the movie but are wearable replicas which you can buy for your own. 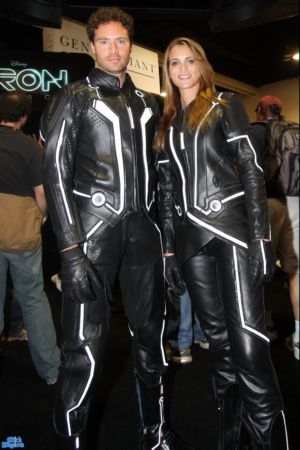 Not unexpectedly, our good friend Kevin is calling these suits “the best leather suits ever in the history of movies”. He’s in that stage where everything he fancies are the “best”. We get it Kevin, you like Tron, now can we stop all that talk about “the best ever”. 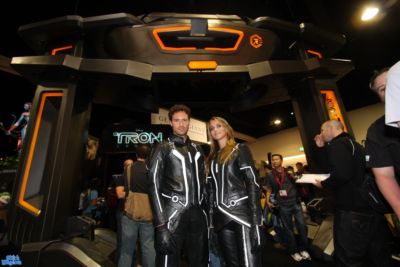 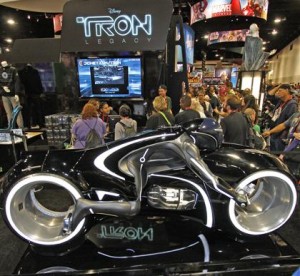 Do you dream about driving this awesome and powerful motorcycle which, according to our friend Kevin, is the best movie motorcycle. 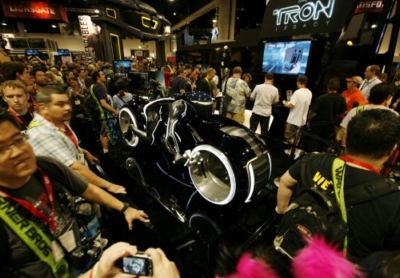 We can’t think of any other movie motorcycles (there’s James Dean’s but is there something remarkable about his motor?), so we are gonna defer to Kevin on this one. But maybe you know of a movie motorcycle which is more awesome than this Tron Legacy one?

Tron Legacy Movie Trailer (posted 30 July 2009). Movie trailer for the science fiction movie, Tron Legacy, which is set for release in 2011. The movie stars Garrett Hedlund (as Sam Flynn) in his biggest break to date.

The other cast members are as follows:

* Jeff Bridges as Kevin Flynn/Clu, who appears in his older form and his counterpart Clu remains the same.
* Bruce Boxleitner as Alan Bradley/Tron
* Michael Sheen as the film’s villain who ‘is not a person at all'[8]
* Olivia Wilde as Kevin’s loyal confidant.
* Beau Garrett as an unknown character
* John Hurt as an unknown character

We are soo looking forward to watching Olivia Wilde in the big screen!