Terrence Howard Shirtless and Underwear Photos (posted 9 February 2015). One of our favorite stars in the 1990s is Academy-nominated actor Terrence Howard. We fell in love with Terrence the first time we laid our eyes on him in the 1995 movie Mr. Holland’s Opus. He went on to star in critically acclaimed movies such as Crash, Hustle and Flow (for which he was nominated for an Oscar), and Lee Daniel’s The Butler.

The last time we saw him on the big screen was in The Prisoners where he played the role of a grieving father who’s daughter was kidnapped. He was great in the movie but his role was shorter so the press attention was focused on Jake Gyllenhaal and Hugh Jackman who were also great in their more substantial roles.

These days, Terrence is starring in Empire, the season’s biggest television hit which has been chalking the highest ratings and which are a favorite with critics. We already blogged about two actors who play gay lovers in the show, Jussie Smollett and Rafael de la Fuente. Go check out the links if you want to see shirtless and underwear/Speedo photos of both actors.

Terrence hasn’t bared some skin on Empire (yet) but he did chuck off his clothes and, in some scenes, wore nothing but a pair of blue Speedos in Pride. Released on cinemas in 2007, Pride is a movie loosely based on the life of Philadelphia swim coach James “Jim” Ellis who mentored black kids with hopes they’ll become competitive swimmers. 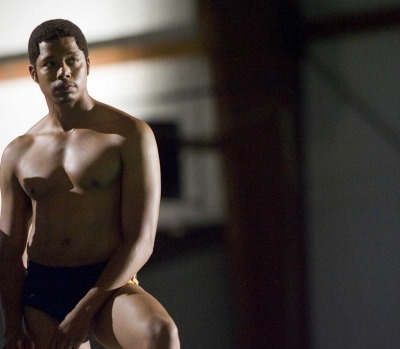 We learn move about the movie and Terrence take on his role in this article from girl.com.au:

Howard says he knew nothing of the real Ellis prior to taking this on. “I’d never heard of him and I didn’t know he breathed oxygen.” But once he agreed to play the character, Terrence Howard immersed himself in research. “I learned from a number of different swim coaches and spent a lot of time having them train and teach me how to swim. I also talked with a lot of swimmers and mostly the young swimmers moved me the most.”

In taking on a real life character, the trick in this case, says the actor, was to avoid undue clichés. “You can’t make a lot of this stuff up, because it’s already an established fact. There’s so many facts supporting who this man is, he’s well known in the swimming community and so you can’t fabricate and fluff through a particular area that you don’t fully understand. You have to subscribe yourself to the true events that took place which is difficult.”

Yet at the same time, Terrence Howard concedes, while the film is based on a real-life character, there is more fiction in this piece than fact. “Oh there were a great deal of liberties taken with regard to his story, but not his message, not his program, you know?” 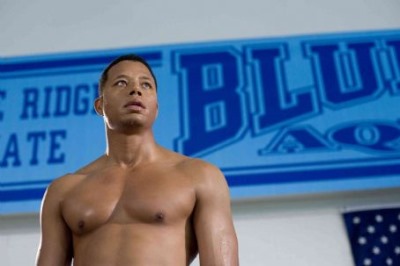 Do you recognize the guy with short hair in the middle? That’s Evan Ross. You’ve seen him in Hunger Games: Mockingjay where he plays the role of Messalla. Yup, he is the son of the great Diana Ross and he’s married to Ashlee Simpson. 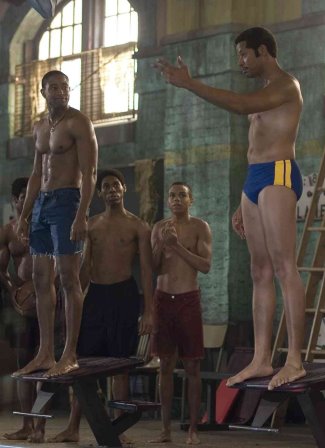 Howard in his Speedos! 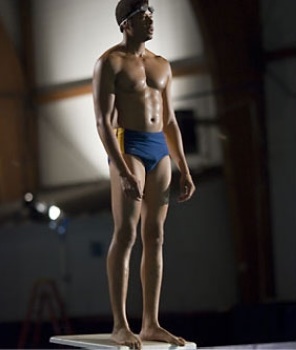