Dan Gronkowski is a University of Maryland tight end who’s been drafted by the Detroit Lions. Here’s a local television report on the day he was picked. Video after the jump.

Here’s the transcript of the report if the video does not work for you:

From wivb: A western New Yorker is heading to the National Football League. Dan Gronkowski and his family were ready for the big day. It would get wild, but not for a while. Expected to be drafted in the fourth or fifth round, Dan’s party started at noon.

The picks and the hours went by slowly, but no one chose the tight end from the University of Maryland. Dan escaped the tension by walking his dog, and playing basketball.

Then, it was official. Dan Gronkowski had made it to the NFL. The scene may repeat itself. Dan’s younger brothers Chris and Rob could both be draft picks in the next few years.

Well, let’s update this post which we published two years ago to give you some updates on Dan Gronkowski. First, it might interest you to know that he is now engaged to Brittany Blujus. This is bad news to those of you girls who’ve been googling words like “dan gronkowski girlfriend” or “who is gronkowski girlfriend” and similar search terms. Yes, he has a girlfriend and they are getting married this month, July 2011. Dan, jokingly, stated on Twitter that their wedding is going to be bigger than William and Kate’s royal wedding. Here’s what he said:

How was the royal wedding? I heard 2 billion people watched it. Thats nothing, more people r going to watch my wedding this summer haha

Haha indeed. Well, good luck to these two lovebirds who are going to tie the knot soon. By the way, Dan is now with the Denver Broncos after he was traded for cornerback Alphonso Smith last August 2010. 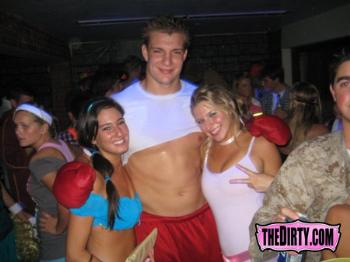 By the by, we give props to the WIVB report two years ago for correctly predicting that the other two Gronkowski brothers could also make it to the NFL. Rob is now the tight end for the New England Patriots while Chris Gronkowski is the fullback for the Dallas Cowboys.

Who is the hottest and sexiest Gronkowski brother? We think its Rob. We’d take him any day over that over-rated Tim Tebow.