Spandex Suits for Male Wrestlers and Other Wrestling Stuff. Are you a fan of the Olympic sport of wrestling? Well, if you are then you will be happy with these photos of male wrestlers in their spandex outfits.

Wrestling is not exactly a popular sport but it has its share of fans one of whom is our good friend Deena. She really doesn’t understand the sport — the scoring system, how one wins, and that kind of stuff — but she watches the TV whenever some wrestling events are being aired. 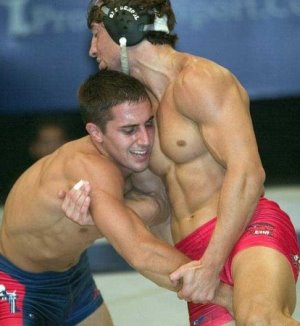 When we asked her why she’s a wrestling “fan”, she went “Sweaty men at the prime of their lives grappling against each other dressed in tights, what’s not to like?”

We’re betting ten dollars that she kinda articulated one of the primary reasons why some “fans” watch wrestling. Anyhoo, for two of the funniest photos in wrestling ever, you should check our earlier post we wrote about Spandex shits for male wrestlers.

Now, any of you have any idea what those ear mufflers (or is that a headpiece?) are for? We’re kinda clueless when it comes to wrestling so those of you who are into the sport would know what the dude below is wearing and why. 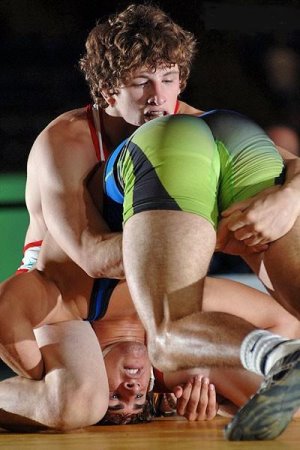 A wrestler from Cornell University goes up against an opponent from another school. 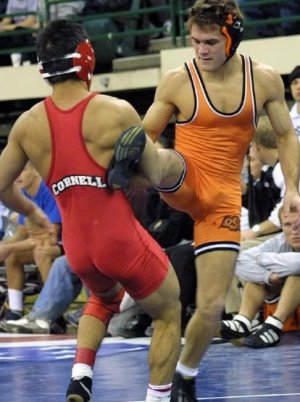 For other men in tight Spandex, check out Matthew Fox’s cycling shorts as well as these group of male athletes in Lycra Spandex.

…..
Aren’t male wrestlers in spandex suits the best? Seriously, they so totally are. Can you think of any sport where the athlete’s outfit screams, “We’re so ready to get laid!” We can’t think of any.

Football? No way. Despite the high visibility of its metrosexual stars David Beckham, Rio Ferdinand, and Cristiano Ronaldo, football just do not do it for us.

Nothing can beat a sport that features men in bulging tights pawing and grappling each other atop a sweaty mat. No wonder, Tom Cruise reportedly hired a “male escort” to do some wrestling with him. 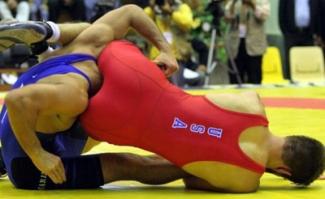 …..
Gay Professional Wrestlers (25 July 2011). This update is for those of you fellow Famewatchers who are wondering whether there are any gay wrestlers. Are there? Well according to our research, only two pro wrestlers (we’re referring to WWE wrestlers or those from the World Wrestling Entertainment) have come out or identified themselves as either gay or bisexual: Orlando Jordan who is openly bisexual and Canadian WWE Hall of Famer Pat Patterson (birth name: Pierre Clermont) who is openly gay.

Here’s a picture of Orlando Jordan looking awesome in his tight spandex. Who doesn’t want a piece of that?

And here’s an autographed picture of Pat Patterson. 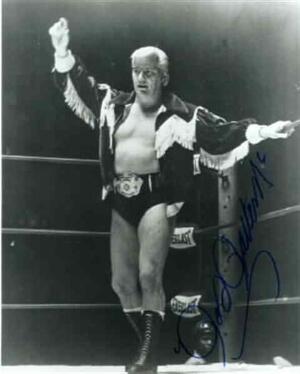 Before we saw this vintage photo, we didn’t realize that Patterson actually started wrestling way back in 1958.