Time for more Hot Men from Cuba and this time we bring you Robeisy Ramirez, the 18-year-old boxer whose bulging biceps outpunched all his opponents to win the coveted gold medal (flyweight division) at the London 2012 Olympic Games.

Who did he beat en-route to his gold medal-winning performance? In the first round, Robeisy outscored Katsuaki Susa of Japan in the Round of 32. He then went on to beat Chatchai Butdee of Thailand in the Round of 16. And he followed those two victories with a win over Great Britain’s Andrew Selby in the quarterfinals. In the semifinals, he beat Irish boxer Michael Conlan giving him the right to fight for the gold medal in the final round. The final round saw the Cuban teenager beat Mongolia’s Nyambayaryn Tögstsogt by a slim margin (17-13). 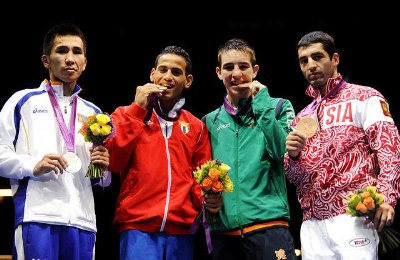 He is number 1!!! What’s number one in Spanish. Oh yeah, numero uno. Robeisy Ramírez es el número uno! Haha. You see what Google Translate can do for our language skills. We are suddenly Spanish speakers.

Since he’s very young at only 18 years old, we expect at least one more Olympic appearance for Robeisy unless he decides to go professional and give Manny Pacquiao a run for his millions. [Okay, we don’t even know if Manny and Robeisy are in the same weight categories. All we’re saying is that the latter can have a lucrative professional career in boxing like Pacquaio does.]

This is how you avoid a face punch.

And this is how you celebrate a boxing victory – Robeisy-style.

It is worth noting that Robeisy has a history of winning gold medals in the international competitions he participated in. He won the gold medal in the Singapore 2010 Youth Olympic Games (as a bantamweight) and he followed up that victory with another gold medal-win in the 2011 Guadalajara Pan-American Games. He really is a talented boxer, isn’t he?

For our other posts about boxing and boxers, check out Billy Joe Saunders: Boxer as Sunspel Underwear Model and Manny Pacquaio’s Big Headed Underwear.