Robbie Williams Hair Transplant Admission. British superstar Robbie Williams had a hair transplant although he admits that he really didn’t need to have one. He’s blaming the “L.A. lifestyle” which prompted him to undergo the unnecessary surgery. Here’s Robbie talking about his hair transplant on the Graham Norton Show:

I’ve had a thatch done, I’ll tell everyone now. I didn’t even need it, that’s the weirdest thing. I had like three months off and got bored so thought, I’ll go in.

Huh? He had a hair transplant because of the LA surgery lifestyle and because he was bored? Good thing the LA lifestyle does not encourage men to cut off their family jewels or else Robbie might have gone for it to cure his boredom. But wait, maybe we will eventually include him to our list of male to female transgender models because MtF surgery is kinda catching on in Hollywood. [Want more Robbie blog posts? Check him out in his kilt underwear.]

Robbie Williams Before and After Hair Transplant Photos. Since Robbie really had no problem with his hair before he went on to “thatch” it, there really isn’t any dramatic before (“Ewww. Receding hairline, he’s going bald.”) and after (Wow. Look at his gorgeous hair!) photos for us to see.

But here’s one we grabbed from therapiehairrestoration.com: 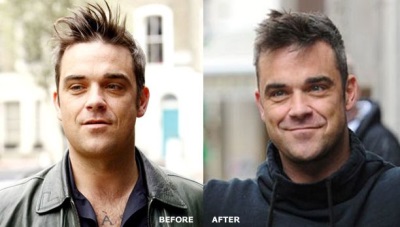 If you ask us, the only difference in the photos is the way our Robbie combed his hair but what do we know. Said Therapie Hair Restoration website actually praises Robbie for undergoing the surgery supposedly because it is, according to them, a preventive measure against male pattern baldness. Okay, they’re the experts so maybe they know something we don’t.