Kilt Underwear. Years ago, English singer Robbie Williams decided to give his fans a “treat” so he lifted his kilt to show them his black underwear. You’re a man slut for doing that Robbie, but we love you for it. 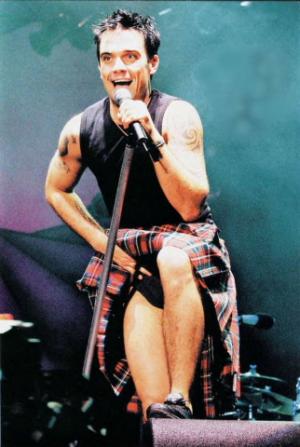 Anyhoo, according to a report by The Sun our Robbie is very happy these days following his engagement to American girlfriend Ayla Field. Says Robbie’s dad, Pete Conway [via The Sun]: “At last, Rob is happy. That’s what you want for your kids and this is the happiest I’ve seen him. Ayda is so beautiful and so delightful and so lovely and just so right for him. They are brilliant together. I don’t have grandchildren so I’m pleased Rob’s going to start a family.”

Good for you, Robbie! Nice to see your kilt underwear!

We are updating this post to give you more of Robbie’s kilt underwear. He sure loves to show them off, eh? These ones are from a Switzerland concert performance in 2015. 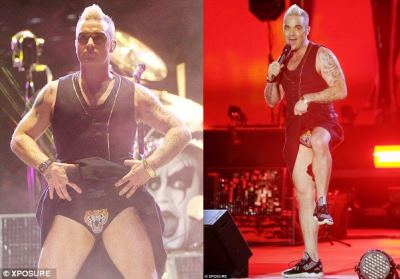 Now, if there is a contest on which celebrity rocks the best kilt underwear, we gotta give the award to this guy. We do not know his name but he is one of the Property Brothers. You gotta give him props for showing off his kilt underwear at the Emmy red carpet. 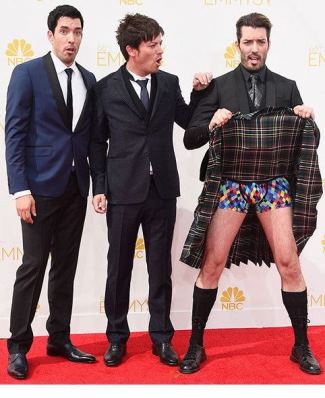 Want more hot guys in kilt? Well, check out the link. Who knows maybe you will see more kilt underwear. 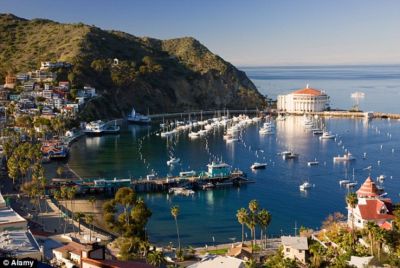 Who will she wear? Is she going to follow the example of Chelsea Clinton and Khloe Kardashian who wore a Vera Wang? Or maybe she’ll throw caution to the wind and go for a gypsy-style wedding gown? Hehe.

The “she” we are referring to is Ayda Field, longtime girlfriend and soon-to-be-wife of British singer Robbie Williams. The two are reportedly tying the knot today in Santa Catalina Island.

It’s reportedly going to be a very private ceremony. Says a source who blabbed to the Daily Mail:

‘The wedding could be at the Wrigley Mansion, which is completely private and only rented out by the family that owns it.’

And says another, reportedly a close friend of the groom:

‘Robbie does not want a big circus and just wants a private affair behind closed doors with a handful of very special people.’

“Robbie is keeping it a small affair for family and close friends. But the Take That lads thought it would be a nice gesture. Robbie is like a brother to them.”

Oh, geeze. Does Robbie have the blabbiest friends and family members or what? We, of course appreciate their telling the media about the supposedly super-secret wedding but they should have given us more important information such that would answer the most important question: Who Will She Wear?

FROM THE BLOG ARCHIVES:

UFOs and Aliens: Is Robbie Williams the Next Celebrity Weirdo?
09 February 2009

Anyways, the Daily Mail has an interesting report on Robbie Williams and his fascination with UFOs, aliens, government conspiracies, and that kind of stuff. The Mail reports on what Robbie supposedly calls his “alien visitation experience”:

Even more bizarrely, he has allowed himself to appear on the site in a taped interview during which he happily discusses what he believes were alien visitations to him while he was living in America. The first incident, he says, involved his seeing a black-and-yellow striped flying saucer that flew over his sunbed as he lay with a friend at night looking at the stars while staying at the plush Beverly Hills Hotel.The other occurred early last year – according to Robbie – when he was with friends in the recording studio attached to his bedroom at his LA home. He claims he was playing a CD of a song he’s written about UFOs, called Arizona, when a ball of light appeared over his house.

Then he says a black ‘negative’ light about 3in thick and 20ft long shot into the room through a balcony door, then out through another window. In an attempt to explain what he saw, Robbie finishes the online interview by saying with complete seriousness: ‘All this could be government ops – they want to cover it and we might be getting in the way.’

Weird, eh? But maybe he really experienced what the paper is reporting? You decide!

Turns out that Robbie Williams is still alive :-) Well, we haven’t heard anything about him lately so it’s good he has surfaced from wherever he’d been hibernating.

Chest hair? Robbie? Really, ain’t that so 90s? But some will undoubtedly find it cute. Now, what about some Robbie Williams naked pics to satisfy teh googlers?