Mischa Barton Lesbian Kiss, Smoking Photo, and Fashion Style. Is this a “friendly” kiss or should we read more meaning out out of it? Mischa Barton says its just a platonic kiss between friends: “As I’m sure most of you have already seen, I was photographed at my 23rd birthday party engaging in what most of the gossip blogs refer to as a ‘girl on girl kiss’. Well I just wanted to take this moment to clear the air by saying that the kiss was purely platonic. We were joking around and it was taken out of context.”

Really, Mischa? This looks a little more than platonic to us. 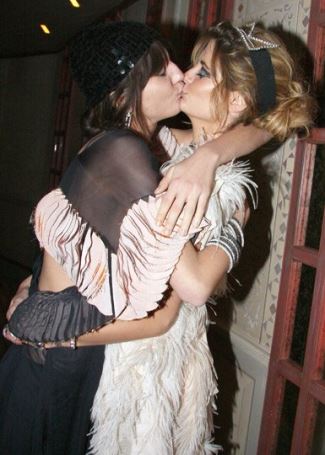 For those who are wondering, the Mischa Barton lesbian kissing buddy is Irina Lazareanu.

OTHER BLOG ENTRIES ON MISCHA BARTON

Break Up: Luke Pritchard and Mischa Barton (posted: 9 February 2009). Luke Pritchard is reportedly saying bye, bye, bye to Mischa Barton. According to a mole who talked to The Sun: “She was really smitten. They’d been on nights out in London and really got on. But when she suggested he visit Paris he got cold feet. He said he didn’t think they had a future and it was better they went their separate ways. Mischa was heartbroken.”

Mischa on The Beautiful Life (posted 25 September 2009). Mischa Barton is reportedly shooting her comeback TV show called A Beautiful Life which will be a “younger version of Sex and The City”. Says Mischa of her role:”I play a super-bitchy model in New York, which is fun but hard because that is so not me. If the pilot does well, I may be spending a lot more time in New York.”

Ashton Kutcher is also in the cast. If he appears in his tighty whities — see Ashton Kutcher underwear — we will have no choice but watch the show. Hehe.

Mischa Barton Smoking Fashionista. We give ten points to Mischa Barton for picking a really cool-looking denim jacket. But we deduct 50 points from her for that cigarette and for lighting up in public. Mischa dear, here’s an unsolicited advice: if you want to look like an old hag in five years, do continue with that smoking habit. Or maybe she’s just shooting a scene for her comeback TV show, A Beautiful Life? 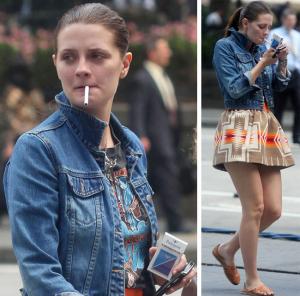 Mischa Barton Fashion Style: Leopard Print Mini Dress (posted 20 October 2010). Hey you, snooty fashion critics! What do you think of Mischa Barton’s leopard print dress? Them critics at the Daily Mail are having a field day making fun of it. And, well, we have to agree with the critics on this one. Well, except that part where they called her an A-Lister.