Miley Cyrus Asian Slanty Eyes Scandal. There’s a scandal out there involving Disney star Miley Cyrus. Check out the photo below of her slanting her eyes. Because this particular gesture has been used to mock Asians, a Chinese organization, understandably, has issued a statement condemning the teen star. Anyhoo, for those of you wondering, Miley is apparently the girl sitting on the guy’s lap. We gotta admit that we can’t seem to recognize her.

What say you, Ms. Miley Cyrus? If that’s you in the pic, then that was really an un-cool thing to do. [What are you, a member of the Spanish Olympic basketball team? 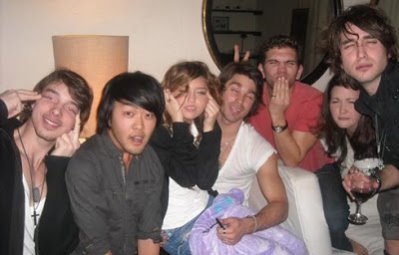 Someone should give this girl cross-cultural lessons and, considering the recent scandals she’s been involved in, lessons on good manners and right conduct. And we don’t think her boyfriend underwear model Justin Gaston is a good influence at all.

Can someone smack this Lucie Kim gal to get some sense into her? What’s up with her class action suit against Miley Cyrus? We criticized Miley’s actions and non-apology but this class action suit is beyond stupid.

From TMZ: “Kim claims to represent more than 1 million Asian Pacific Islanders who live in L.A. County. Kim claims when Cyrus posed for the photo, she ‘knew or should have known that her image would be publicly disseminated via the media, which Cyrus knew focused on her private life, specifically TMZ.’ Kim says in the suit, filed today in L.A. County Superior Court, that each Asian Pacific Islander is entitled to the minimum damages for a civil rights violation — $4,000. Add it up — $4 billion!”

Come on now, Lucie J., we did not like what Miley did but you are being silly and ridiculous.

Margaret Cho shows us how one should respond to the Miley Cyrus slanty eyes scandal. This is the way to do it. Not that ridiculous lawsuit thingie that Lucie J. Kim filed.

I wasn’t necessarily a fan of
Her, her dad, or Hannah Montana
I tend to prefer the songs of Rihanna
Racism against Asians is simply bananas!

Oh Miley!
Chinky eyes make you look wily
prejudice isn’t thought of so highly
it doesn’t make us all smiley

Why is there nothing that Asians can do?
To make fun of other races as easily as you
Why isn’t racism against Asians taboo?
Why are we always so racially screwed!

All you have to do is pull at your face
To make your eyelids resemble our race
This kind of joke has no proper place
Miley Cyrus is a disgrace!