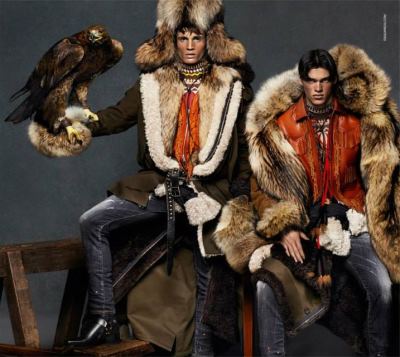 Mens Fur Coat 2015. Did the DSquared2 powers-that-be just throw the gauntlet against animal rights and anti-fur activists such as PETA? Looking at the fashion label’s Fall Winter 2015 Menswear campaign, it looks like it did.

You don’t come up with ads that prominently display fur like these photos and not get a knee-jerk reaction from PETA, no?

Now, Famewatchers, before you take sides in any forthcoming PETA vs. DSquared matchup, lemme remind you that these mens fur coats seen on the models may actually be made of faux fur. You know, may be its not the real — genuine fur made from a dead animal — deal.

We tried to find out whether DSquared has a policy of not using real fur but we can’t find any. Maybe they don’t like to put such things in print for fear that they might not be able to follow it 100%.

On the other hand, a forum poster at the PETA website mentions that DSquared uses real fur or leather for its clothes and shoes.

We must admit that we still don’t know where to stand on this issue. We vacillate between supporting PETA and other anti-fur/leather advocates and being annoyed with them sometimes. 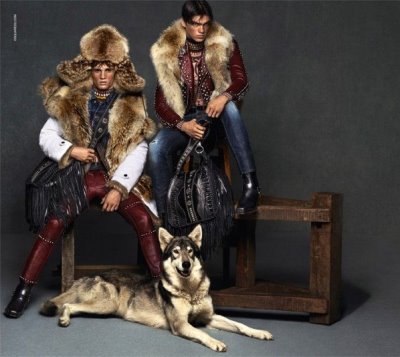 For those who are wondering, the male models featured in this campaign are Julian Schneyder from Austria and Filip Hrivnak from the Slovak Republic. What say you of Dquared’s mens fur coat 2015?