Male Underwear Models. Hey look who’s wearing some really nice underwear briefs? Two gorgeous male models, that is. Really cool, eh? Now, which kind of undies do you prefer? The tighty whitie one or the other tighty whitie one? Hehe. What kind of choice is that? Anyhoo, we kinda like the second one below because it looks more interesting with its mesh like pattern and all. [Sorry, photos deleted.]

Let’s begin with some vintage underwear brought to you by Jockey briefs. This is the kind of underwear your daddy must have worn. Not bad, eh? The briefs look tight and snug which is what some men prefer to wear. 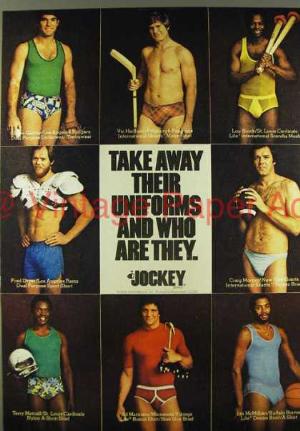 Contrary to what you might think, famous athletes posing as male underwear models is not a recent phenomenon with the likes of English footballer David Beckham. In fact, you can trace this back to …. well we don’t really know when this started but one of the famous athletes who had a side career as an underwear model is American baseball star and Hall of Famer Jim Palmer of the Baltimore Orioles. 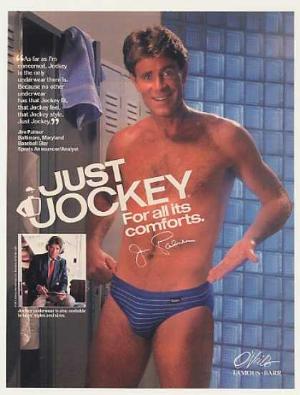 He modeled for Jockey underwear in the late 1970s and the Jockey ads featuring Palmer were used in billboards in Times Square. Here’s one of his modeling photos. According to wikipedia, Jim donated the proceeds of the sale of his underwear posters to a foundation called the Cystic Fibrosis Foundation.

Another sportsman who became one of the celebrated male underwear models is the gorgeous Scandinavian football player, Fredrik Ljungberg. Check him out in his white Calvin Klein briefs. Our friend Deena confesses that this photo of Fredrick makes her go, “Rawr”! We don’t think she’s the only one. Hehehe. 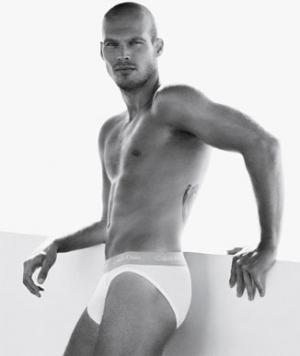 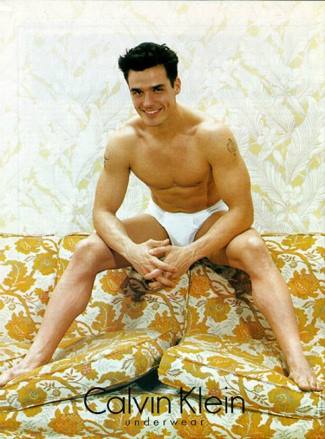 Well, we actually know he is Antonio Sabato Jr. but Kevin initially thought it’s Marky Mark. We are pretty sure you are familiar with Marky Mark but, in case you don’t, it is the rapper name of Mark Walhberg. Yes, millenials, Walhberg was a rapper/underwear model before he made it big as a Hollywood A-Lister. He is now an A-Lister right? Or is he still getting there?

Note: As it happens, our grandma didn’t like some of the photos referred to in this post. Consequently, we decided to move said pics to our male underwear models and celebrity underwear gallery. You should check it out because it is hotter in there :-)