Luke Evans Boxers or Briefs. Want more male celebrity underwear? Of course you do. When was the last time we blogged about what famous men are wearing underneath their trousers? It’s been, like, several months already which means it is high time we talk about your favorite male celebs’ underoos. In particular, do they like to wear boxers or briefs.

Well, in the case of Luke Evans, it looks like he likes him his boxer shorts, no? Nothing wrong with that because boxer shorts are comfortable according to our hubby.

But, onscreeen, it looks like our Luke ain’t limiting his choices to some boring – although comfy – boxer shorts? Why do we say this? Because in this screencap from his 2013 movie, The Great Train Robbery, the Welsh actor sported some old-school tighty whitey briefs underwear.

When it comes to brand preference, here’s proof that our sexy Hobby star is a fan of Tommy Hilfiger. Look closer at his peekabo underwear below to see the label. 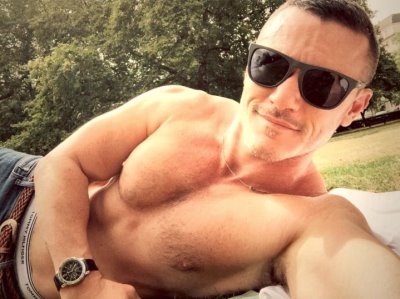 Did you know that Luke is an only child? Well, apparently, he is. He talked about his childhood in a recent interview with Interview Magazine:

Do you have any siblings?
LUKE EVANS: I’m an only child. My mum and dad are six in each family. They’re both twins, and they only wanted one. I always say to them though that they’re lucky—it could have all gone wrong. [laughs] They put all their eggs in one basket. But I’m very, very close to my mum and dad. My mum is only nineteen years older than me, so she could be my older sister, which is really nice. I’ve got a load of cousins. My mum’s twin sister’s son, there’s only seven months between us, and we’re super close. He’s like my brother. We’re probably closer than our mothers are, actually.