Luke Evans Boyfriend? Did Welsh actor Luke Evans ever come out as a gay man? Apparently he did! As far back as 2002 when coming out was not yet a part of the vocabulary of famous gay celebrities. The Hobbit actor came out in an interview with Paris Barclay of The Advocate. Here’s the relevant excerpt from said interview:

*****
Where did you grow up? I come from south Wales. A place called Aberbargoed.

A small town? Oh, very small, yeah, too small for me and my ego! [Laughs] I had a very difficult upbringing. I was brought up as a Jehovah’s Witness. And I’m the only child. And my mom and dad still are Jehovah’s Witnesses, so I was never able to sort of naturally come out. It would have been very difficult anyway, even if my parents weren’t Witnesses, to come out in the village that I was brought up in. [But] they both know now and they’re both fantastic and they love Taboo. My mom and dad said, “You know, you’re our boy and no matter how much we love our religion and our God, we’re sure he’s going to understand that we can never turn our backs on you.”

How did you decide you’re going to be open about your sexuality? Well, it was something I’d spoken to a lot of people about, including my boyfriend at the time — we’ve broken up now — but at the time when I just got Taboo, I knew that even though my part was a straight character everybody knew me as a gay man, and in my life in London I never tried to hide…. I knew I was going to have to do interviews with gay magazines; I knew this was going to happen. So I thought, Well, I’m going to have to be open. It’s who I am. And if people don’t like it, then I don’t want their jobs. I’ve never been a very good liar, which is another thing…

Aren’t actors all good liars? Well, it’s not nice. Look at George Michael, let’s say. I mean, he hid it for so many years, and then he gets found out in a really awful way…. Y’know, you start a slippery slope downward, and I didn’t want to start that at 22. If that means I’m going to be a poor man at 60, then at least I’ve lived a happy, open, gay life and not had to hide it from anybody.

I’ve had letters from people who have read my articles and said, “I’m a guy, I’m 18, and I’ve not come out to my mom and dad yet, but it was so nice to hear your story, and you know, I wish your article would have been longer, because you gave me hope for the future.” As far as I’m concerned it’s not a big issue. You come out, that’s it, the end.

He also had this to say in an interview with Gay Times, a UK publication: “People come up to me in pubs, gay pubs, mind you, and can’t believe that I’m gay.”
*****

So why are people not very familiar with Luke’s sexuality? Probably because it does not define him, that his gayness is not front and center of who he is as a person. And, well, he kinda also didn’t want to talk about it.

From Women’s Wear Daily: “As his stock in Hollywood has risen, he has downplayed his sexuality. “It’s not something he is hiding, but not a fact he wishes to discuss in the press,” as one of his publicists put it. But when it was suggested that in taking on these action roles, he may be setting a precedent, Evans didn’t entirely sidestep the question. ‘It’s good for people to look at me and think this guy is doing his thing and enjoying what he’s doing and successful at it and living his life,’ he says. ‘And that’s what I’m doing and I’m very happy.'”

….
Luke Evans Boyfriend? Now that he is an established Hollywood actor (an action star at that!), it looks like our Luke is ready now to come all out…. with a boyfriend! Well, actually, we are not sure if these two are boyfriends or in any kind of relationship.

In other words, don’t quote us that this hottie is indeed Luke Evans boyfriend. But they sure look good together, don’t they? How cute are they? 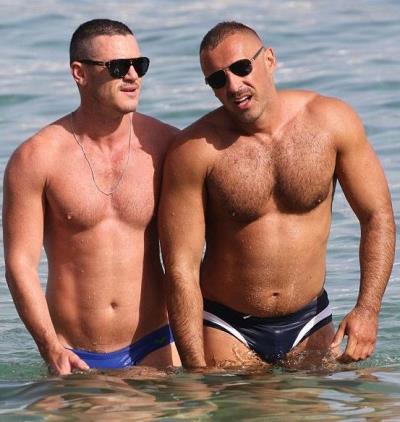 2020 Luke Evans Boyfriend Update: We are updating this post to note that our Speedo-lovin’ actor sorta came out and identified his boyfriend. Apparently, his name is Rafa Olarra. He is a set designer and creative director who is also a tri-athlete. Yay, don’t we love our sporty creative people here at Famewatcher.

Anyhoo, on his Instagram page, Luke posted a video of him and Rafa looking oh-so-happy together to which he added the following caption, “He loves my welsh humour….no, honestly!! he does!! #hawaiimemories #happiness”. 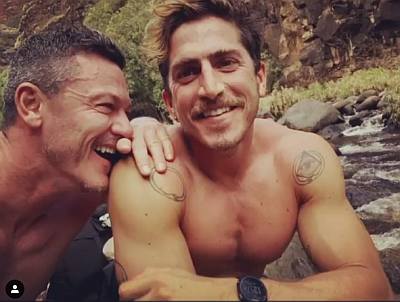 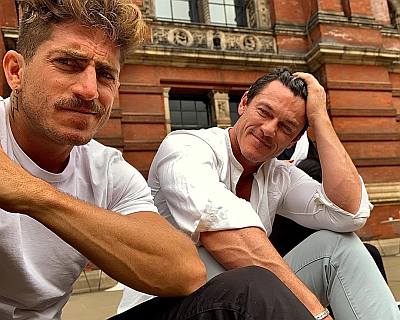 Now that they are out about their relationship, can a wedding be far behind?