Italian Cardigan For Men: Gaudi Menswear. We’ve been blogging about mens cardigan for sometime already but this is the first time we blog about cardigans from Italy (aka the Fashion Capital of the World, or is it?). As you may have already guessed, these cardigans are from Gaudi fashion house.

The model, as you may have also guessed, is no other than German male model Eugen Bauder. 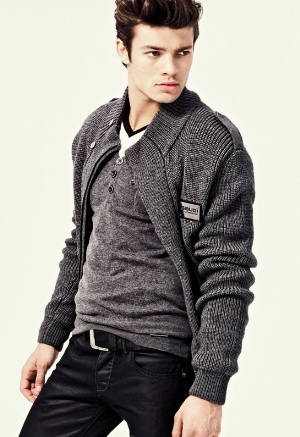 Okay, Eugen’s not wearing a cardigan in this last photo but he’s sooo looking cute and boyish so let’s just include his pic. Hehe.

Want more info on the male model, huh? Okay, here goes: Although he’s primarily known as a German model, he was actually born in Kazakhstan. But he is of German descent and he grew up in Germany where they moved when he was five years old.

The six feet hunk started modeling in the mid-2000s and has modeled for top-end brands and designers such as Hugo Boss, Shiatzy Chen, Dsquared, Calvin Klein, Jean Paul Gaultier, and Armani.

Looking for black jackets for men? Well, check out these jackets from the Gaudi Fall Winter 2010-2011 menswear collection. They’re pretty fabulous, no? More photos of Gaudi jackets (featuring male model Eugen Bauder) after the jump. Which of these is your favorite winter jacket?