Is Simon Cowell Gay Update. The “is Simon Cowell gay” conundrum continues. Apparently, in 2014, a witness in a court case against singer Tulisa stated that he knows men who hooked up with the music mogul. From the Evening Standard:

In the video recorded in Mr Mahmood’s Metropolitan hotel suite, which was played to the court, the reporter was heard asking Mr Varey if X Factor judge Simon Cowell was gay.

Mr Mahmood asked: “Have you slept with him?”

Asked why, he answered: “I will when I make my move.”

Mr Mahmood said: “How do you know he’s gay?”

Mr Varey replied: “I know people who have.”

So that’s proof that Simon is a friend of Dorothy, eh? Well, he is also an “intimate” friend of gay dude David Walliams. 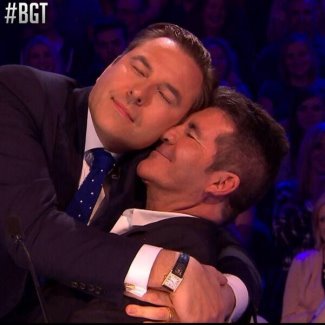 And ain’t his relationship with Ryan Seacrest enough proof that our Simon is gay? They even go huggy-huggy in their undies. Note: We know it’s photoshopped. Hehe. 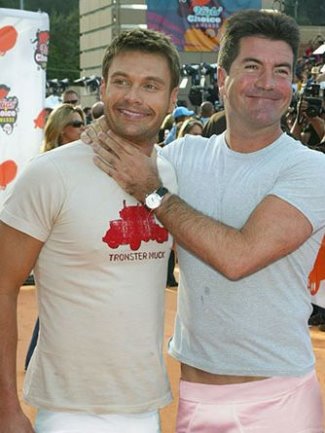 Meanwhile, an evidence that Simon is not gay is the fact that he impregnated his baby mama who happens to be the wife of his friend. Real men don’t shack up with their friend’s wives but this does not prove that Simon is gay. 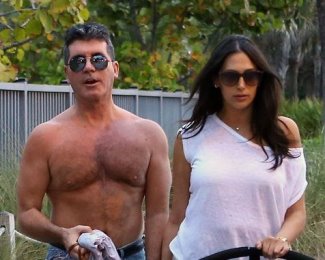 Is Simon Cowell Gay? He is SO NOT! (posted 1 February 2009). Remember our earlier blind item about an American Idol judge who is supposedly having a gay affair with someone who is also involved in the popular show? We speculated that it is Simon Cowell and that the person he is involved with is either Ryan Seacrest or Vice President for Casting Billy Kemp.

Well, we could be wrong. The Daily Mail reports that Simon Cowell declared that he is SO NOT GAY:

‘In this business, if you were gay it wouldn’t be a problem, would it? It is not exactly unusual to be gay in the music business or the TV business. It is 2009, after all. So if you are, you are; if you are not, you are not.’

And you are not? ‘I am not gay,’ he says, stubbing out his last cigarette and preparing to go back downstairs to the Britain’s Got Talent bear pit. Cowell also takes this opportunity to point out that it is not true that he dyes his hair, which is dark and bristly, like a brush.Indeed, he looks as if he should have a matching dustpan somewhere about his person. If he was in a closet he would, obviously, be taken out regularly and used to sweep the stairs.

So if Simon is not gay, and the Blind Item subject is not Kara …. then the American Idol judge who is having a gay affair with another person involved with the show is …………. Hmmm.

What Simon is, is a Wannabe Knight! Check out an earlier post we wrote about his dreams of becoming Sir Simon.

On Saturday’s opening episode of Britain’s Got Talent, he says: “This is my only chance for a Knighthood, I have to get this right. Sir Simon, it just has the right ring!”

We know he is joking but in case he’s not, “Sir Simon Cowell” doesn’t really have a nice ring to it. It just doesn’t have a “royal” sound. Unlike, say “Sir Paul McCartney” which sounds very regal indeed.

But Simon is probably the most powerful man in the entertainment industry today, his influence cuts across geographic areas, so we’re sure he will eventually get his wish.