Is Ricky Martin Gay? Or Just a Metrosexual Straight Guy? Is Ricky Martin gay? We certainly think so! Why do we think so? Well, us count the ways that our sexy Latino singer is pinging our gaydar. 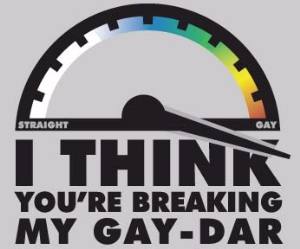 1. Because he’s one hell of a dancer who loves to shake his bonbon. Seriously, didn’t we agree that male dancers who love to shake their bonbons are mostly gay? [See Mark Kanemura Gay.]

2. Because he’s got a great body. He’s, like, in his 40s (okay, maybe late 30s) but he still looks great, how gay is that? Seriously, aren’t straight guys who are of his age already fat and fatter?

3. Because he made babies the Clay Aiken way. Seriously, who goes through the trouble of having kids through a surrogate mom with its many possible complications and the added expense? Straight guys? No way, they’d rather boink a woman than do it with a cup!

4. Because when you search “gaydar” on Google Image, you’ll come up with this picture of Ricky and some dude. Don’t they look good together? 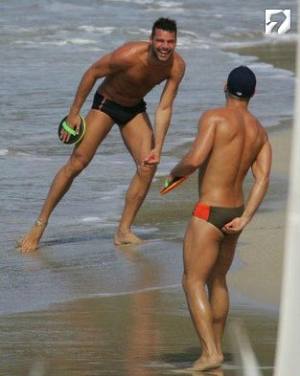 5. Because his “skin care guru” says he is gay. Okay he didn’t actually say that Martin is a friend of Dorothy but he also kind of did:

From softpedia:
[snip] “skin-care guru” Ole Henriksen, who counts Ricky as a client, was interviewed by a Swedish magazine and was asked at some point who would he choose to spend a romantic vacation other than his partner. “I’d go for Stig Toefting (former Danish soccer player) but since he’s straight, I’d say my client Ricky Martin” came the reply.

Hmm. We hope this Ole got his wish of dating Ricky Martin. Anyways, let’s look forward to Ricky’s coming out of the closet soon. We think he will do it sooner rather than later.

Is Ricky Martin Gay Update: Oh boy, is this update too long in coming. Hehe. We should have updated this post when Ricky came out in 2010 but its better late than never. Yes, our Ricky is gay. Yes he finally came out. And yes, he dated the guy in the Speedo photo above. No they are not still together.

As a matter of fact, Ricky has a new boyfriend named Jwan Yosef. They are engaged to be married so wedding bells are a-comin’ for these two loverboys. 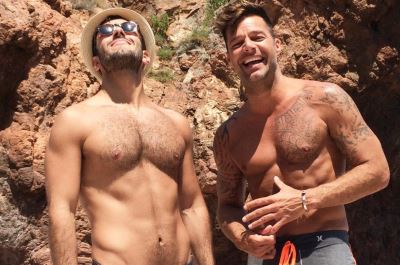 Those of you criticized us for saying that Ricky is gay and who insist he isn’t don’t know what you’re talking about.