Gay NFL Players: Out or Rumored Gay American Football Jocks. Are there actually gay American football players whether active or retired and whether professional or college footballers? Of course there are, here’s some of them:

Ed Gallagher: Offensive tackle for the University of Pittsburgh. He tried to commit suicide as he struggled against his homosexuality. He survived the attempt but became a paraplegic as a result. He went on to become an author and public speaker focusing on disabilities and homosexuality.

David Kopay: NFL running back who played for various teams such as the San Francisco 49ers, the Washington Redskins, and the Green Bay Packers. He came out after he retired from the NFL. He revealed that he had a relationship with fellow footballer Jerry Smith.

Kopay currently serves as a board member in the Gay and Lesbian Athletics Foundation and is an ambassador for the Federation of Gay Games. Because of his involvements, David is probably the most visible in our list of gay NFL players. He deserves lots of props!

Jack Kemp: Quarterback for the Buffalo Bills and Republican Congressman Jack Kemp was rumored to be gay. Read more: Is Jack Kemp Gay?

Jerry Smith: He was a tight end for the Washington Redskins from 1965 to 1977. He died of AIDS in 1986. Though he never came out, David Kopay stated that they were an item.

Esera Tuaolo: Esera was an NFL defensive linesman from 1991 to 1999. He played for the Green Bay Packers as well as other NFL teams. He came out as a gay man in 2002 via HBO’s Real Sports. He wrote an autobiography, Alone In The Trenches: My Life As A Gay Man In The NFL, which was published in 2006 and has worked with the NFL to fight homophobia in the league.

Roy Franklin Simmons: Roy is an offensive lineman who played for both the New York Giants and the Washington Redskins. He came out as a gay man when he guested at the Phil Donahue Show in 1992.

Active footballers who are rumored to belong to our gay NFL players list include the following:

Kwame Harris. He reportedly dated a guy named Dimitri Geier (note: not the dude with him in the pic). The two made the news recently after Kwame allegedly beat his ex-boyfriend. 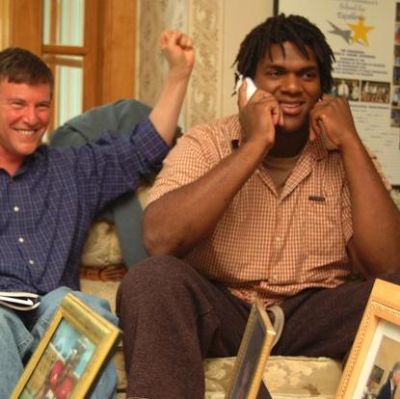 The NFL has no current players and startlingly few ex-players who are known to be gay, but it appears ex-49ers and Raiders offensive tackle Kwame Harris, a former first-round pick, has involuntarily been added to the list as a result of the legal fallout from a fight at a restaurant.

According to the San Mateo Daily Journal, a dispute over soy sauce at Su Hong restaurant in Menlo Park, Calif. last Aug. 21, has landed the former NFL player in court after he assaulted his ex-boyfriend.

Kerry Rhodes. He allegedly dated his male assistant, Russell “Hollywood” Simpson, who went on to blab about their affair and who posted intimate photos of themselves. 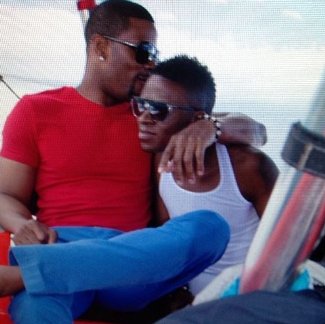 That’s proof enough for us here at Famewatcher. Hehe. 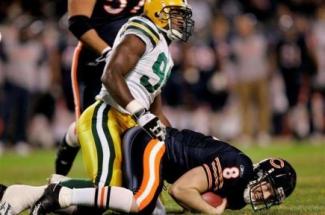 We wonder what Tony Romo will say about that.

2. They have tight ends, and wide receivers, and wedge busters which are the gayest terms for a player position in team sports ever. Tight end, really? These sexually connotative terms prompted one Tom Brady fan to write a song that goes:

Sure we know it’s tongue-in-check but still…. Oh, by the way, is there anything gayer than “Touchdown”.

4. A recent research published in a reputable journal found that at least 30% of American footballers in college have had some same-sex encounters. Aha! If this is true, then American football players are gayer than the general population only 10% of whom are considered to be gay.

* To be fair, the study which stated that 30% of American footballers are gay is very very flawed and, although it was indeed published in a reputable journal, it doesn’t pass the smell test at all.