Gay Men Speedo Swimsuits. Marc and Lorenzo sitting on a tree. K.I.S.S.I.N.G. Sorry. There’s actually no tree sitting in the photo below. Neither is there kissing going on between Marc and Lorenzo. Instead, we see them walking on the beach doing HH. That’s holding hands for you, clueless oldies who don’t know Textspeak. Or Netspeak. 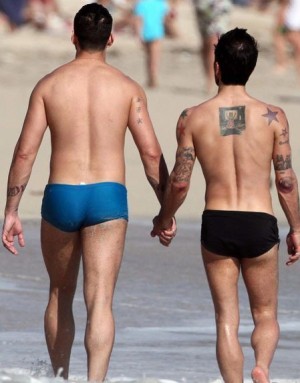 Oh, by the way, these photos of the happy lovebirds were taken before they broke up. We’d be sad for them for their breakup but we’re pretty sure they’ve moved on to equally happy relationships.

But let’s have more gay men Speedo photos featuring Marc and Lorenzo, shall we?

Who’d you rather between these two? And who looks better in his Speedos? Is it Marc and his black Speedo briefs-style swimsuit? Or Lorenzo and his squarish blue swim trunks. 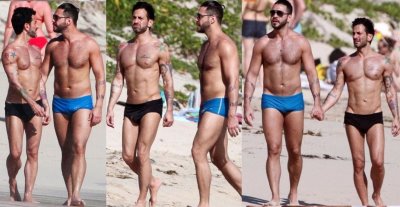 Is Marc Jacobs the luckiest guy in the world or what? He is rich so he’s got all the moolah. He’s not bad looking either so you can’t say that boys are dating him for the moolah.

He is still young so he’s got lots of time to enjoy his moolah and his relationships. And, most importantly, he looks good in his Speedos which is why we see lots of pics of him in his swimsuits.

Did Marc also date that handsome hunk of a performer named Harry Louis? We’re not really sure if it was he who dated Harry but we sure can see them dating too. After all, Marc looks good in Speedos as you can see in the above photos. And Harry also looks good in Speedos. So having them walk on the beach — like in the preceding pics — would make break the internets.

Let’s end this post with this hot photo of James Marsden rocking his Marc Jacobs suit. Why are we doing this? To prove to nana that we are not just about swimsuits. Nana, we’re also into fabulous well-tailored men’s suits like what James is wearing here. Haha. 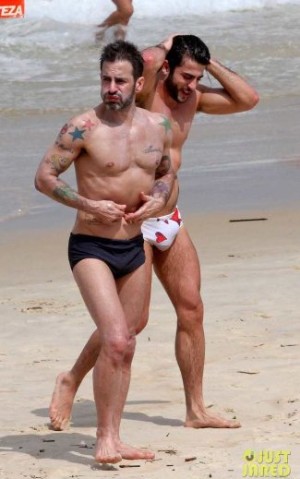