Expect to see Elias and his co-stars rocking their Speedos. Why? Because, Barracuda is about swimmers and swimming. As well as the other stuff that life throws at us, of course. If you want more men in Speedo? Go check out our post on Best Celebrity Speedo for 2016. 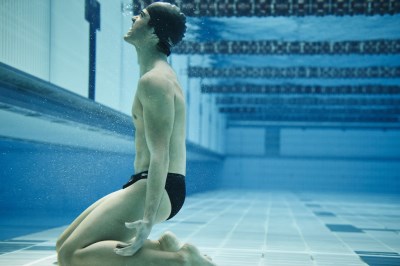 ABC TV gives us some details about the Danny character (or the role Elias is playing):

Danny is a young man, consumed by his desire to become a champion Olympic swimmer. When awarded a swimming scholarship, Danny is thrust into the prodigious world of an elite private school in Melbourne. He never really fits in, not at school or at home and the only place he feels true to himself is in the swimming pool. He becomes fiercely determined to be the best.

His entire identity becomes wrapped up in his sport. Danny is completely self-centered in his determination to make the Olympic team, which soon alienates his family and old friends. His only distraction comes in the form of his connection with teammate Martin Taylor. Handsome and wealthy, Taylor is everything Danny is not. Danny is seduced by Taylor’s world and their developing relationship becomes inextricably linked to Danny’s road to success.

Hmmm. So what happens next? Well, we can only speculate! So speculate we must! Will Danny have a girlfriend on the show? Or will Danny and Taylor become gay lovers? We hope the producers will go for the gay lover route because most of our readers have a thing for men in Speedos hooking up. Right, Famewatchers? 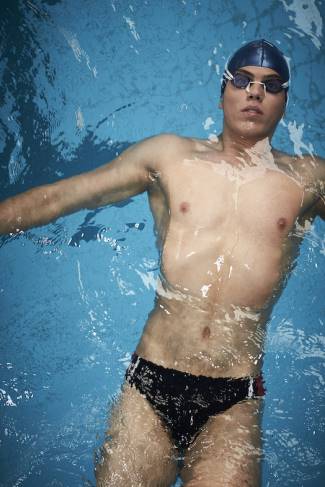 Now, will Danny and Taylor represent Australia and win them some Olympic gold medals? They should! Will either or both of them become an alcoholic for some reason? Please, no! Let’s not go there. No one likes to watch a depressed alcoholic on TV especially if it is a young man. Or probably some of you do?

Anyways, are you excited for Barracuda? Unfortunately it airs only in OzLand so them Aussies are damn lucky!

Ain’t this the kind of show that Netflix should snap up for international distribution. Hey, Netflix people! So what are you waiting for? Buy the streaming rights for this show ASAP. Young men in Speedo, what’s not to like? If you buy  Barracuda, we promise we’ll never cancel our membership! Besides, you don’t want Amazon to beat you, do you?

In conclusion, let us have another Elias Anton shirtless photo, shall we? You’re lookin’ good, Mr. Anton! 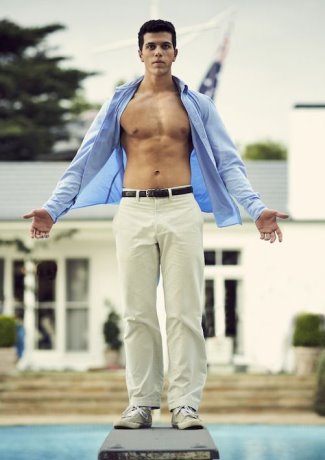 Oh wait, dailyreview.com.au released an early review for Barracuda. Is it positive? You bet it is. In fact, it heaps praises for the show, its lead star Elias, and the rest of the cast.

The young Elias Anton (who is currently completing his VCE) holds the series together as Danny — he begins with a quiet drive to be “the best”, which soon evolves into a dangerous and destructive single-mindedness. It’s an impressive TV debut, as is Benjamin Kindon’s performance as Martin.

This is only the second acting gig for Elias so to be told that he is able to “hold a series together” is a big achievement for a young man. So props to you, Elias! May you find more success in the future. And may there be more Elias Anton shirtless (and Speedo) photos in the future too.