Dolce Gabbana Pajamas for Men: David Gandy’s Sleepwear. Our imaginary model boyfriend David Gandy rocks his Dolce and Gabbana pajamas sleepwear during a recent fashion show. OMG. He is so the man we’d like to share our bed with. Who among you ladies (and non-ladies) fancy spending the night with this guy? Hey, it’s everyone! We don’t blame you. And we give you props for having good taste. Hehehe. 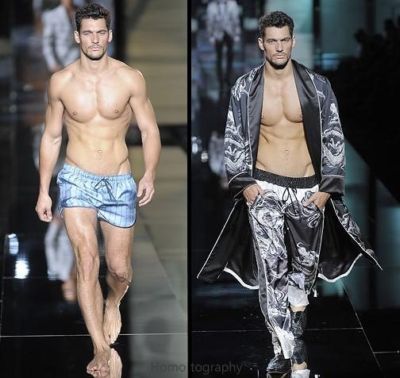 It’s very very unlikely that we’ll truly end up in bed with this British hunk but, heck, we can dream about him, can’t we? Here’s two D&G tighty whitie underwear photos of our David to aid you in your dreams. Hehehe. 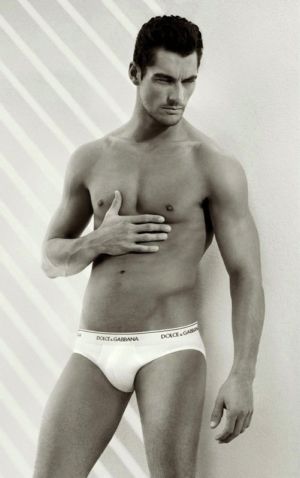 Want more men in pajamas? Or if you’d rather ogle at David’s masculine awesomeness then check out an earlier post we wrote about him last year.

Metrosexuals, like David Beckham, are out. Twink male models are out. Muscle men are in. This is the conclusion arrived at by a writer in the British tabloid, Daily Mail, which uses British male model David Gandy as proof of its conclusion.

Do you agree with the Daily Mail? We’re not sure if we do. David Beckham and his metrosexuality will be with us for a long long time. And we see a lot of male twinks ruling the men’s fashion runway so we don’t think they’re out.

This is not to say that muscle hunks are not “in”. There’s always a niche for them in male fashion. Besides, we don’t think well-built models were ever “out”. David, in particular, was never “out” in the modeling scene. Heck he’s been at the top of the heap since he started his modeling career. Last year, he was ranked by Forbes Magazine as the third highest earning male model (behind Matt Gordon and Sean O’Pry) while models.com ranks him in second place in its ranking of the top earning Money Guys (after Gabriel Aubry).

Oh wait, we are supposed to be blogging about the men’s pajama line of Dolce and Gabbana. Sorry, about that. To make it up with you, here are some gorgeous male models in D|G pajamas from the labels Spring Summer 2009 menswear collection. 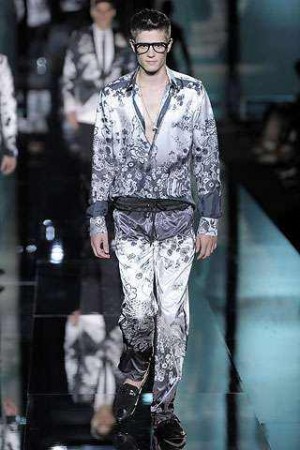 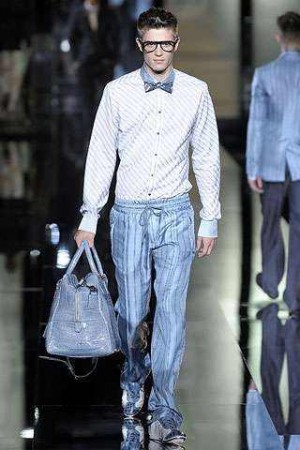