David Henrie Shirtless and Vintage Swimsuit Update. Guess who’s playing a lifeguard in an upcoming movie? It’s our David Henrie, of course! Specifically, he will star as the young Ronald Reagan in an upcoming bio-pic of the late American leader. As we wrote in a post about him — see Ronald Reagan Shirtless — the former President worked as a lifeguard before he moved to Hollywood. The movie is scheduled for release sometime in 2022. 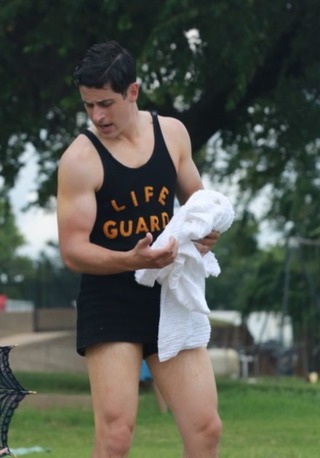 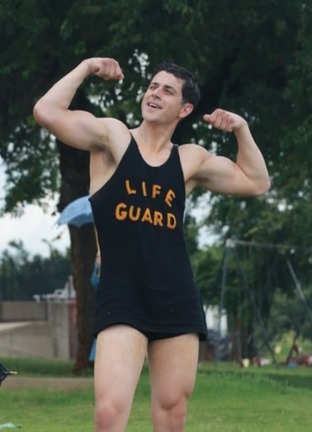 Too bad, it looks like the producers went for the vintage swimsuit look rather than a briefs-style Speedo. In an interview with Risen Magazine, David talked about playing Reagan and the prospect of him wearing a Speedo.

Quote: “I grew up hearing about Reagan and everyone in my family – aunts, uncles, cousins and stuff – everyone was a big Reagan fan. So I always heard quotes by him, and I always had an admiration for him. I always respected a lot of things he stood for so getting the script and getting to dive into him – I’m so stoked! I’m getting to play one of the most-known presidents in our history so it’s going to be really cool to do that. The only thing I’m not looking forward to is wearing those little speedos. [Laughter] The world is going to see parts of me that no one else has seen. I don’t know if you’ve seen Ronald Reagan as a lifeguard, but man, he’s wearing speedos and they are going to be tight. I’m going to have to go on a diet for like eight weeks before that.” 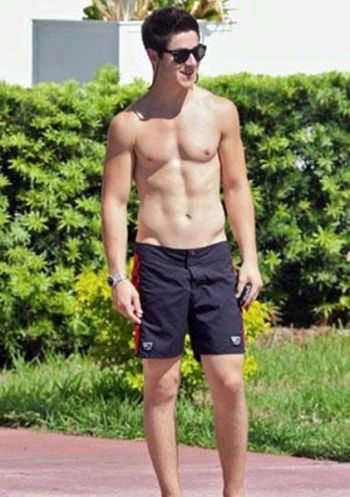 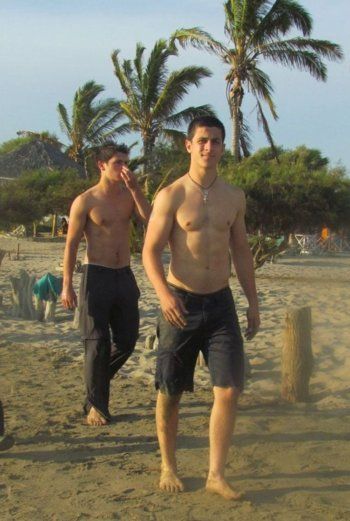 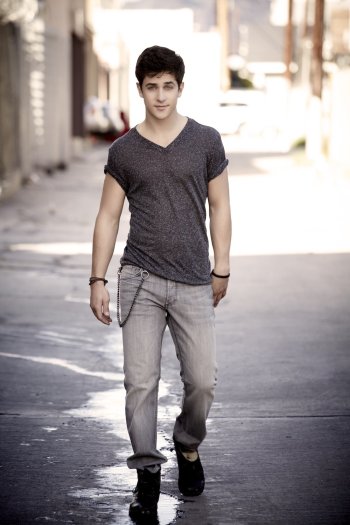 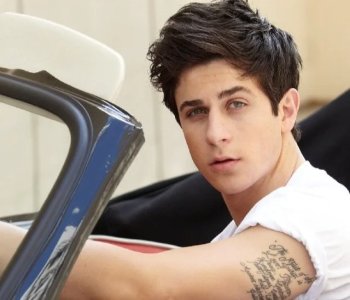 …..
David Henrie Wedding. We are updating this post to note that David is apparently a married man. He tied the knot with then-girlfriend Maria Cahill nearly three years ago on 21 April 2017. Yay for them, they’ve got a third year anniversary coming up! The couple now have a girl named Pia who was born last year. Anyhoo, here’s a photo of David and Maria during their wedding day. Awww. Their smiles are making us happy for some reason!!! 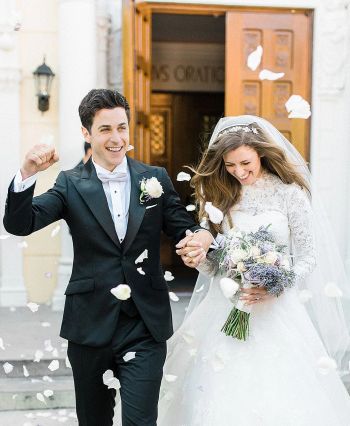 Here’s what he says about being married and his wife, Maria, in a Facebook post reminiscing about their wedding: “April 21st, 2017 was the greatest day of my life, and today marks the greatest year of my life. When I randomly grabbed these boxing gloves before I entered the reception, I thought it was a joke, but looking back on it now I think it’s much more symbolic then I realized… cause in order to even be at a place where we could marry, we had to earn it. When we met, Maria and I both knew that the goal of getting to know one another was to see if we were meant to marry… the goal was not to hook up or chill… and that meant we had to do things different then then ‘swipe right’ culture we live in… and that took work, self-restraint and a genuine love which always puts the other person first… the result of this process: I found my best friend first… and that’s the women I am honored to journey through life with until death do we part… here’s to many more, and it’s my prayer that we can all find our best friends to journey through life with!” 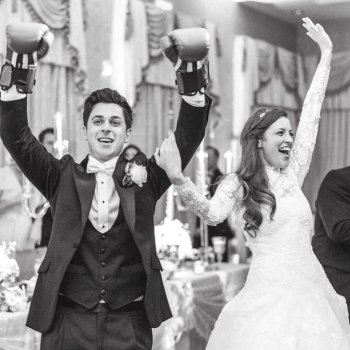 …..
David Henrie Shirtless Photos (25 August 2016). What is former Disney teen star David Henry doing these days? Well, he must be preparing for his role as the young Ronald Reagan. Variety Magazine reports that he bagged the role for the indie movie “Reagan” which will be directed by Sean McNamara. No word on the release date but you should watch out for it.

Now, here are some images for those of you looking for David Henry shirtless pics. Does he have the best washboard abs among young Hollywood stars or what? 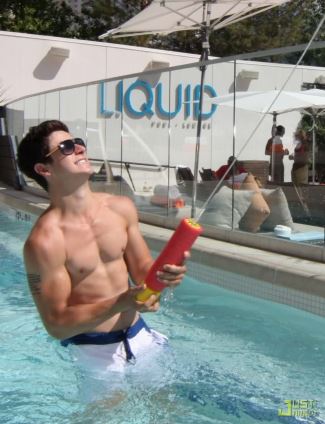 David Henrie Underwear: Boxers or Briefs? What’s our young actor’s underwear preference? We don’t know. But he’s wearing briefs in the rightmost image below. When it comes to brand preference he, apparently, likes him some Hanes undies (left). 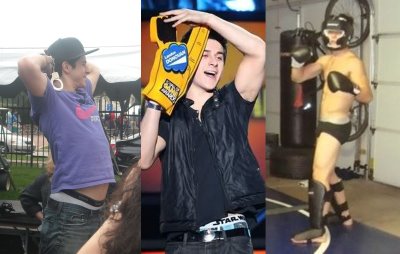 David Henrie Gay or Straight? His fondness for V-neck outfits and his friendship with Gregg Sulkin prompted our co-Famewatcher Kevin to put David in the friend of Dorothy column. Hehe. 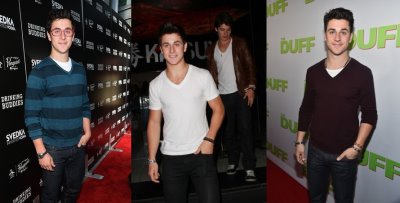 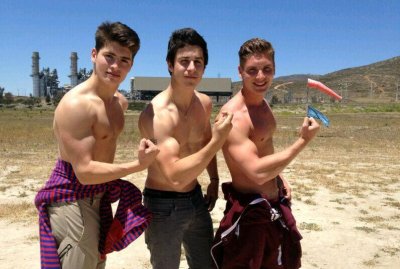 David Henrie Girlfriend. According to whosdatedwho.com, David dated Elle McLemore and Lucy Hale. Not at the same time of course. He also dated – or is still dating – Miss Delaware 2011 Maria Cahill (photo below). Their last public pic together was taken in 2015 so people are speculating that David and his beauty queen are no longer an item. However, Maria re-tweeted a recent David twit so maybe they are still dating. 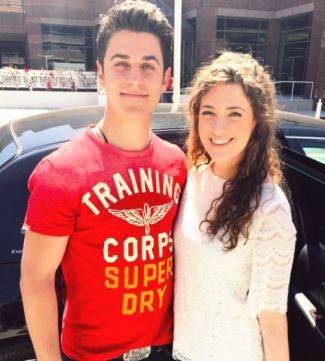 …..
David Henry on Guys With iPhones? (15 January 2010). Is this David Henrie of Disney’s Wizard of Waverly Place? The iPhone photo was uploaded at the guyswithiphones website and, not surprisingly, it got the peeps there all atwitter. We’re not really sure if its him but we’re posting it here for you guys to decide. That’s our new motto: We Post. You Decide. 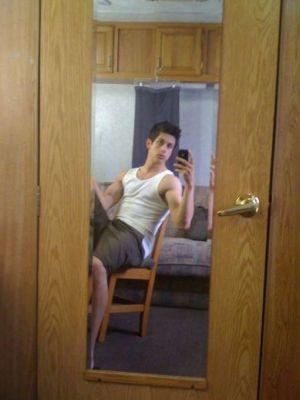