Daniel Lerwell and James Lilley: Cross-dressing MMA Fighters. You want some photos or our cross-dressing thug-beaters, don’t you? Well, here’s a photo of our two idols as regular guys. One of them works in a bank while the other is in the plumbing business. Darn, ain’t they hotties? 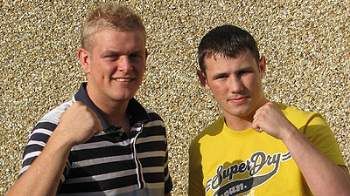 Daniel and James as MMA fighters Lion Heart and Lights Out. 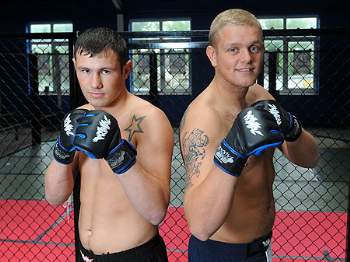 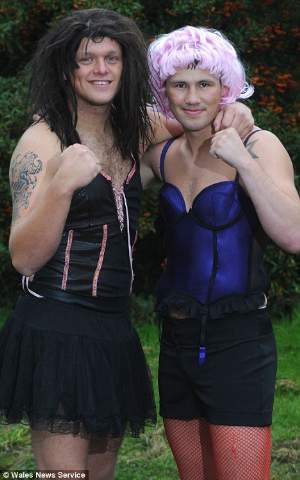 Daniel Lerwell and James Lilley: Cross-Dressing MMA Fighters Beat Thugs. We’re sure you’ve seen this video already since it is an internet sensation. But here’s a short description for those of you who were hiding in a cave these past few days: Two drunk thugs tried to beat two male cross-dressers but the cross-dressers turn out to be mixed martial arts fighters so the thugs got themselves beat instead.

Anyhoo, the cross-dressers have now been identified as Daniel “Lion Heart” Lerwel and James “Lights Out” Lilley. They’re now internet-famous around the world and they’ve promised that they’ll dress in drag the next time they enter the octagon.

Here’s what Lerwell, a plumber, says of his new-found fame (via Daily Telegraph): “To be honest, it has been bonkers today. All I have done is answer the phone and do interviews. Transsexuals around the world have found my Facebook page and want to be my friend. I’ve never seen anything like it.”

And here’s Lilley, who works in a bank, on the positive buzz about their cross-dressing street fight adventure: “All we wanted was a nice drink with friends, there were about 10 of us in total. The punch itself didn’t really have much impact. I get punched all the time in the ring and I didn’t see this one coming. But we’ve both said we will wear the clothes we were out in that night when we get back into the ring, next year.”