Christof Innerhofer: Alpine Downhill Skier – Shirtless Underwear Photos. We came across the photo below in Instinct Magazine’s list of hottest male athletes in the 2014 Sochi Olympic Games and we immediately fell in love with the guy in the pic.

A little googling helped us identify the gorgeous guy. His name is Christof Innerhofer. He’s an Italian alpine ski racer who won an Olympic silver medal (for the downhill event) and a bronze medal (for the combined event) in the Sochi Games. He’s also got a gold medal for the Super-G event at the 2011 World Championships.

Is he a celebrity spokesmodel for Intimissimi men’s underwear? 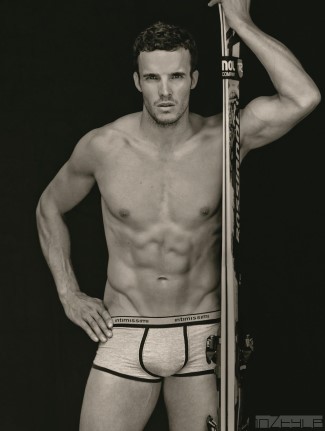 We learn more about Christof in this interview with Box Score News:

You had some trouble early this season; how are you feeling now?
It’s difficult to win races when you cannot train! It was a tough fall for me. I spent a lot of time in therapy, which did not help as expected. It was also hard to watch the others train.

Thankfully, things started improving in December. I was happy with my 5th place in the super-G in Val Gardena, and even in St. Caterina, I skied well in training. It’s become better – week-by-week – over the last month and with any luck that continues in January. I hope to be at my 100% by the World Championships in Vail-Beaver Creek.

You have been struggling with back pain – what’s the problem?
I have been suffering from an inflammation of the spinal vertebra for the last three years. It gets worse during the summer and fall, and then improves in the winter. Why that’s so – we don’t know. We presume that it has something to do with the glacier snow and lots of dry-land training. This year it was even worse than before. I needed to pause for six weeks in the fall. No wonder I could not keep up with the others when racing started.

There are now just over three weeks remaining until Vail-Beaver Creek 2015. You won the downhill on Birds of Prey two years ago so that course must suit you?
Yes, I think my results have shown that I can be fast in Beaver Creek. I like skiing there. It’s the longest steep pitch on the Tour, which is what I like. You can carve right through it when you’re in good shape. The course suits me well.

I am looking forward to real winter conditions in Colorado in February. The harder the course surface, the better for me!

You have shown at previous title events such as the World Championships 2011 and the Sochi 2014 Games that you can rise to the challenge when it really counts – how do you do that?
For me each race is a new chance. I am not afraid of losing or failing. For me it’s all or nothing. That’s something I’ve had to learn the hard way however. Both in 2009 and 2010 I lost a medal by few hundredths of a second. Those experiences left their mark on me. I’ve figured that’s because I didn’t do my very best. Now, my motto is to always give 100% and when that’s not enough, I can still be happy with it.

In terms of medals, you already have one of each color. What is your goal in February?
Today, I race to feel that kick of adrenaline and the challenge of doing my best – that’s fun. I am happy with what I’ve achieved already and that helps me make the best out of each new race, each new chance.

This season, the speed events have been seen some changes, been set a bit straighter and faster, with bigger jumps. How do you like the new FIS philosophy?
The work done on the jumps has been a very positive improvement. They are bigger but well done. In terms of course setting, we have to see the entire season to draw conclusions. But, for example, the super-G course in Beaver Creek was spectacular.

In general, I find change can be good but there is no need to change something just for the sake of changing. The goal needs to be to allow spectators to see the difference between racers with their own eyes, not by looking at the results. Mastering a steep pitch is a main component of a downhill race; it’s not just about skiing straight down as fast as possible.