Cesc Fabregas Gay, Bi, or Straight? Is Cesc Fabregas a friend of Dorothy? No he isn’t. The guy is a straight dude and, since 2011, he’s been married to wife Daniella Semaan with whom he has two children.

However, despite his straightness, the Chelsea midfielder has done some unambiguously gay things such as kissing dudes in public and watching Desperate Housewives. Hehe. Surely, you agree with us that no straight guy watches Desperate Housewives, no???

Anyway, let’s make a list of the things our Spanish football hunk have done and which make us go, “Hmmmmmm!”

First of all, he got kissy-a-kissy with TV personality Raul Gomez. They did it with their lips too! Then, our Cesc got “football intimate” with Cristiano Ronaldo — you know, the Portuguese dude who’s also been rumored to be a friend of Dorothy? 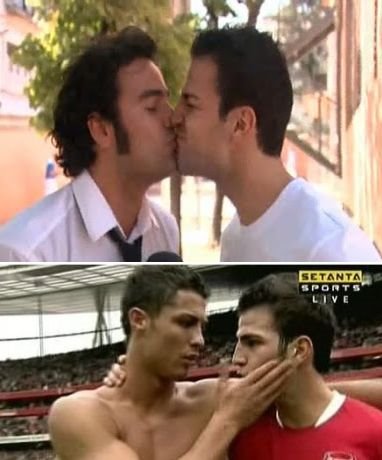 Another “proof” would be this photo. Does he not remind you of them guys in leather bars? Hey, Mister Cesc, are you a leather cub??? He’s too old to be a leather daddy! 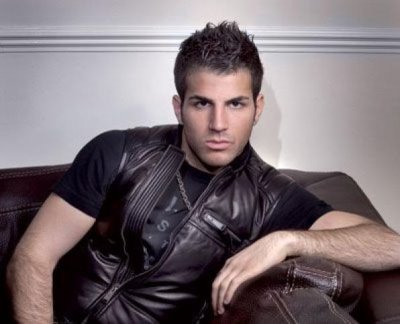 Cesc Fabregas loves him some Speedos. Is this proof that he is a gay dude? Well, in her post on Calvin Harris, Grandma Akita says straight guys don’t wear no Speedos. But we gotta give an exception to European football/soccer players because Euro sports stars really love them their Speedos.

So this photo of Cesc wearing Speedo with his friends who are also in their Speedos is not proof of his s*xuality. 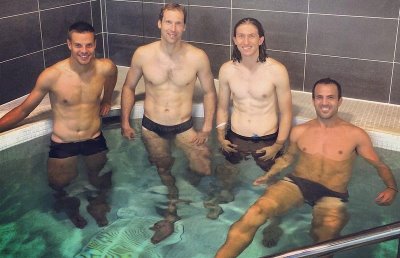 Similarly, the fact that Cesc loves to play with his balls is no proof either. It is simply a proof that he loves balls. Hehe.

Finally, if you believe Kathy Griffin that only the gheys care enough to develop their washboard abs, then you would conclude — after looking at the next photos — that Cesc is as ghey as the sun. Right?

So to summarize, here are some proof that make Cesc Fabregas a friend of Dorothy: He lip-kisses guys in public. He is intimate with Ronaldo. He loves Desperate Housewives. He has washboard abs.

Meanwhile, these are no proof of Cesc’s s*xuality: He wears Speedo. He loves playing with balls. So what do you think, Famewatchers? Are we crazy for writing this? Hehe.

…..
Cesc Fabregas Underwear Photos (Posted 28 February 2010). Look who wants to strip down to his undies when celebrating? It’s our very own Cesc Fabregas, of course. Ah, the things that alcohol (and football victories) make you do. 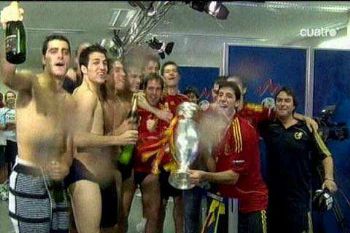 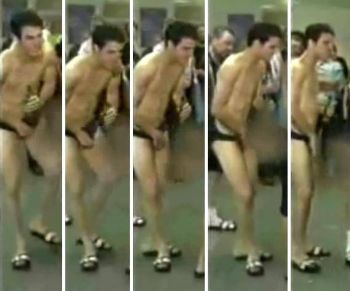 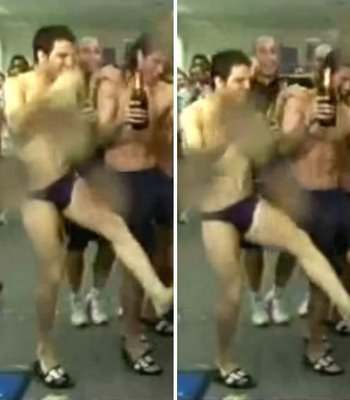 Too bad the pics above are of not good enough quality. But here’s a shirtless photo of our Spanish football looking fabulous in his beach shorts. We think he can also be a “beach shorts runway model” aside from being a “men’s suit model”.

By the way, it might interest some of you to know that our Cesc is open to that man-on-man kiss thing. How do we know? Duh! Because of this video of him taking a peck at reported Raul Gomez. Perhaps our Spanish-speaking friends can explain what the kiss was all about.

Update: Here’s a translation of what the Cesc and Raul are supposedly saying. We can’t vouch for its accuracy, okay?

Raul: How are you feeling?
Cesc: I’m feeling great, very happy and trying to relax and get ready for next season.
Raul: When the ball came all way from other side, and fell to your cute feet (haha) and you passed it to Iniest..how do you describe the moment?
Cesc: Unexplainable!
Raul: Thank you!
Cesc: Thanks!
Raul: Are we gonna kiss?
Cesc: Where?
Raul: Lips…..

So there. Maybe we should include these two in our list of guys making out? Haha!