Calvin Harris Shirtless, Speedo, Girlfriend. More than six years later, we are updating this post originally written by our Grandma Akita mainly to note that our Scottish DJ is engaged and to acknowledge that he was an underwear model. Actually, he did his modeling back in 2014 but, for some reason, Granny failed to note it in her original post. Anyhoo, here are photos of Calvin in his Emporio Armani underoos. 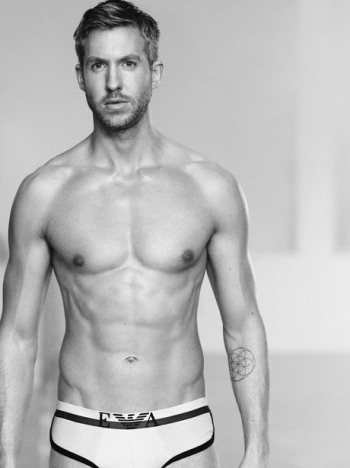 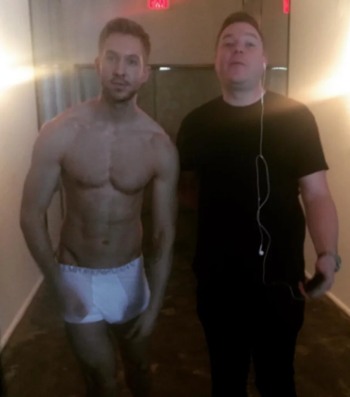 Of course, we are adding some shirtless pics too which Grandma Akita failed to include previously. Hehe. 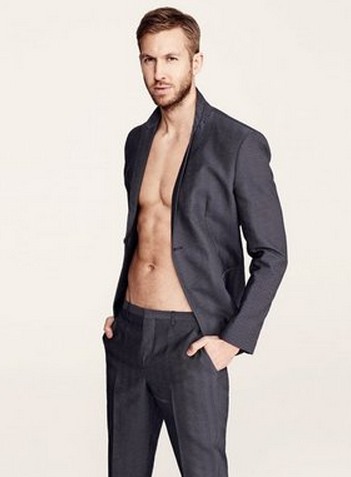 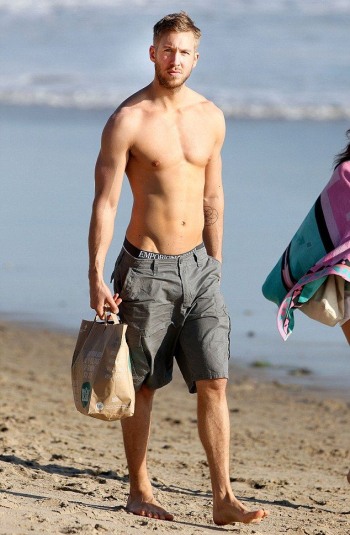 Finally, here’s Calvin with fiancee Vick Hope who’s a celebrity in her own right. Specifically, she is a TV/radio presenter and journalist who currently works with BBC radio. She also has a morning show with ITV. 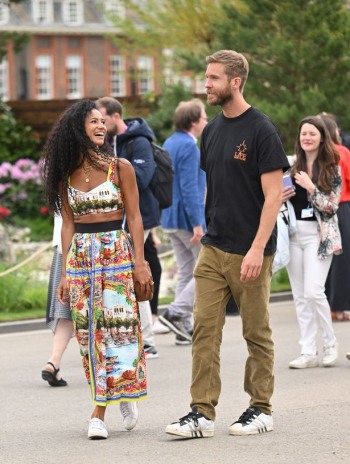 Some details about Calvin and Hope’s engagement from Hello Magazine: “The couple have kept their relationship low-key, but they are thought to have got engaged in March, just five months after they started dating, at Calvin’s farm in Ibiza. The Scottish DJ reportedly popped the question to the Radio 1 DJ under a tree at Terra Masia, Ibiza’s largest certified organic farm boasting 56 hectares of countryside.”

…..
Is Calvin Harris Gay? (26 June 2016). Hello, is the sky blue? Is the water wet? Of course the sky is blue and the water is wet. And, it goes without saying that Calvin Harris is gay. Didn’t he date that yummy male model, what’s his name, Nick Gruber. If this photo ain’t gay, we don’t know what is. 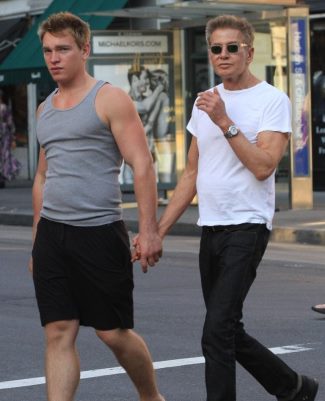 Oopsie, doopsie, kaloopsie! I thought you were talking about Calvin Klein. Then who is this Calvin Harris you are talking about? We’ll check internet to learn more about him and decide his gayness score. I’ll write more later.

Okay, I’m back. After some internet sleuthing I’ve come to the conclusion that this Calvin guy is as gay as Dorothy’s ruby slippers. Why is Calvin Harris gay, you ask?

First of all, he is gay because he changed his name from Adam to Calvin. Why oh why would a guy named Adam — probably the manliest name in the world because it means The Man or Mankind in Hebrew — change his name to Calvin? Let’s be honest, the only male name gayer than Calvin is probably Bruce. Or Bruno.

Now, the only reason we can think of as to why a man originally named Adam Richard Wiles would change his name to Calvin Harris is that this is his way of announcing to the world that he is gay. We get you, Calvin H (formerly Adam). Consider your announcement received!!!

Calvin’s love for Speedos is another proof of his gayness. Real straight guys don’t wear no skimpy Speedos. Sure, European straight guys may wear Speedos but they do so only when they are swimming at the beach or in some swimming pool. Not when when they are hanging out with their equally Speedo-clad buddies as Calvin and his guy “friends” are doing here. They’re briefs-style Speedos too. Oh myyyy! 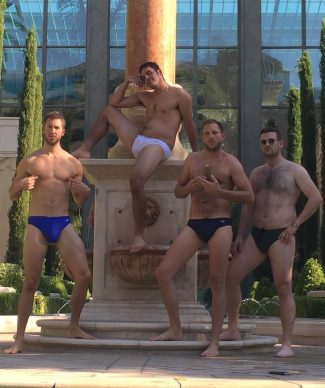 Now, the third and final proof that Calvin Harris is gay is his dating history. Did you know that he dated a girl named Taylor Swift? We did some digging on who this girl is and we discovered that she is known in some LGBT circles as a “beard”.

A “beard”, for those of you too lazy to consult Urban Dictionary, is a woman who dates a gay man to show the world that the man in question is as straight as an arrow. It’s like when Ellen Degeneres dated George Clooney [George Clooney is Gay Gay Gay]. Or when that dancing girl from DWTS dated Ryan Seacrest.

Now, according to our very reliable source from the Beards International, who requested anonymity, Taylor Swift is the number one “beard” in Hollywood. She, apparently, “bearded” for the following Hollywood celebrities who, at one point, had to do something to shot down the gay rumors: Jake Gyllenhaal (you know, the one who shagged Heath Leather in Brokeback Mountain), Taylor Lautner (the one who shagged Edward the vampire), Patrick Schwarziesomething (his dad loves Speedos so Patrick must love Speedos too), and more guys too many to mention.

In conclusion, the final Calvin Harris gay proof is this mock-up image made by our grandson Magnar. 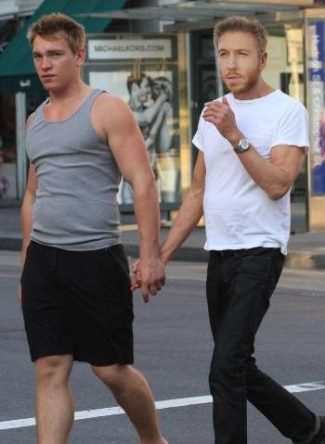 Why is this obviously fake pic a proof of Calvin Harris’s gayness? Don’t you know Photoshop Rule 88? Under this rule, when a man’s face fits nicely on another man’s original image it means they share the same sexuality. In this instance, since Calvin Harris’ face fits nicely on the face of Calvin Klein, it follows that Harris is as gay as Klein. Magnar says this rule is 100% foolproof. We believe our grandson because he is an internet genius and not a liar.

Note: Grandma Akita wrote this post. She welcomes your comments, whether thank yous or eff yous!