Carson Daly Weight Loss: Before and After Photos. Did you know that Carson Daly, the kinda hot host of The Voice, used to be kinda fat? Then he did some weight loss program or something and became kinda scary thin to the point that bloggers are calling him a manorexic who should eat burgers. Then he might have eaten some burgers but not a lot of ’em because he is now lookin’ good. We didn’t know about all these before because we only “discovered” him when we started watching The Voice. Anyhoo, here’s Carson when he was still what our friend Deena would call “plus size”. 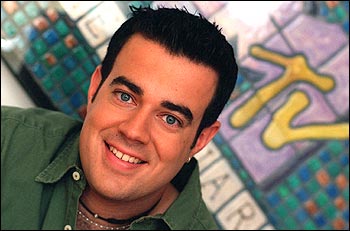 Then here’s Carson looking like a Survivor castaway who spent 39 days in a remote island with no sufficient food to nourish him. 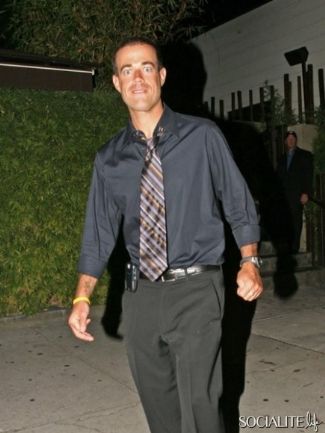 Shocking photo, no? We initially thought it’s a fakepic but then we found this next photo on Socialite Life (socialitelife.com) which confirmed to us that the photo is not fake. 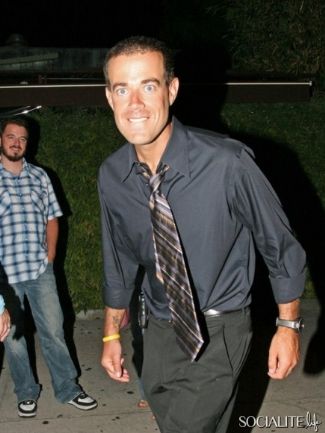 In an 2005 interview with People Magazine, Carson talked about what he did to loss weight:

How did you start your road to svelte?
I loosely refer to it as my New Year’s resolution. I’m really goal-oriented, and as I forecast my objectives for 2005 and set goals to achieve as I entered my 30s, I wanted to eat healthy and be healthy. I needed to get focused at work and in life. As you get older, it becomes a little easier somehow.

Did anything else motivate this change?
No. (Being with MTV) was a five-year celebration, and it was so much fun then. Now, it’s about business. Now, it’s about my career. I can’t go out every night to every bar and restaurant opening.

You look dramatically different.
I’m wearing smaller clothes. I don’t weigh myself. I don’t starve myself. But I (also) don’t eat crappy food at night. I used to be awake at night. I’m asleep now when my show is on.

How is being in California making a difference?
In New York, I can only carve out an hour or an hour and a half to go to a gym or a pool. Here, I love waking up! I went on a 30-mile bike ride this morning.

What’s your morning regimen?
I like to run or go for a swim. I don’t have a trainer. I don’t lift weights. But I just bought a really beautiful Italian Bianchi road bike. I’ve been flirting with this triathalon way of working out. 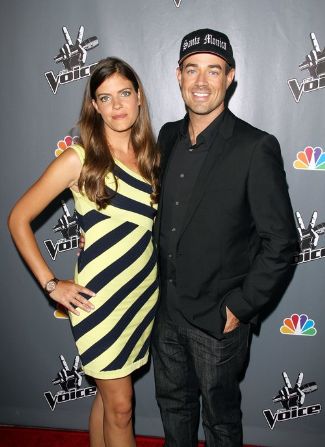 Doesn’t he look sexy in this suit? 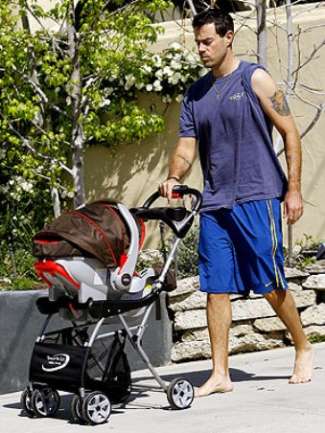 Want some Carson Daly weight loss before and after photos? Here you go: 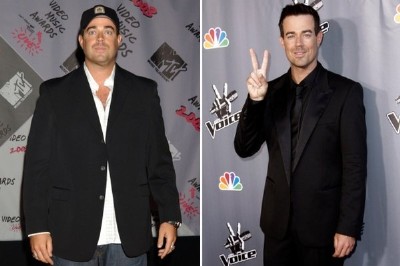 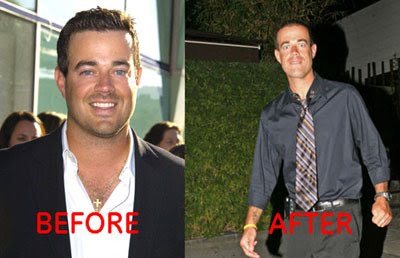 Now those of you who are looking for shirtless photos of Carson will be disappointed to know that there ain’t any (on the internets anyway). Our friend Koosi (who describes herself as an amateur psychologist) thinks Carson has no shirtless pics because he still sees himself as a fat kid. Do you agree with Koosi?