Who’s the dude playing tennis in his black boxer briefs underwear? That dude, fellow TennisWatcher, is no other than controversial tennis player Bernard Tomic.

He stripped to his underwear during a practice session in Florida. Here are more still photos of the Aussie hunk in his boxer briefs. 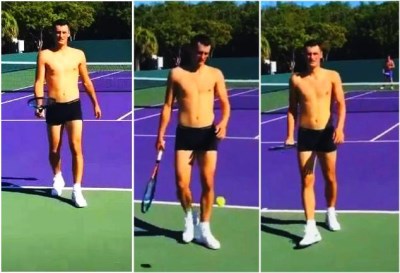 Let’s take a closer look at this Bernard Tomic underwear.

And an even closer look.

If you one of those celebrity UnderwearWatchers who want to know whether your favorite celeb wears boxers or briefs, these Bernard Tomic underwear photos should answer the question for Bernard.

Apparently, he loves him his boxer briefs. Aside from the above photos of him wearing boxer briefs during a tennis practice session, here’s another pic of him wearing one when he did the ALS water bucket challenge several months back.

Hah. He sure can be an underwear model like his Aussie compatriot Nick Kyrgios who’s signed on to be a Bonds Underwear spokesmodel. [Want more tennis players underwear?]

So how’s our tennis player doing these days? Has he won himself a grand slam title already? Or is he still in the “promising” and “not there yet” category? Sadly, it is latter rather than the former. The talented tennis athlete continues to be a hothead and continues to be controversial.

Just a few days ago, he was charged with resisting arrest in Florida. More from the BBC:

Australian tennis player Bernard Tomic has apologised after being charged with resisting arrest and trespassing by Miami Beach Police.

The 22-year-old was accused of refusing to leave his hotel room after an alleged altercation with staff and police on Wednesday.

Tomic told local television: “I’m sorry for the the disturbance I caused.”

Witnesses claim Tomic was asked to turn down his music following complaints from other residents.

According to the arrest affidavit, witnesses said Tomic “pointed his finger aggressively towards hotel security” at the W Hotel after several reports of a raucous party in his rooms.

It is claimed that when police arrived and attempted to evict the world number 25, guests of the player departed and Tomic verbally and physically disobeyed officers.

“It was definitely my fault,” he told CBS4 News in Miami. “I was asleep on several occasions when they complained at first, but you know, it was just a noise complaint.

“I’m just happy I got out and no one got hurt.”

We’re glad he took responsibility for his actions but we are saddened that the news headlines about Tomic are not coming from the tennis court but outside of it.

We continue to wish him well here at Famewatcher. Good thing he’s still young and has some years ahead of him to let his tennis do the talking and prove his doubters and critics wrong.