Baseball Players Underwear. The hazing of rookie athletes in professional sports may be a silly tradition but it is fun, fun, fun. Okay, maybe its not fun for those being hazed but its fun for kibitzers like us who see photos like this: 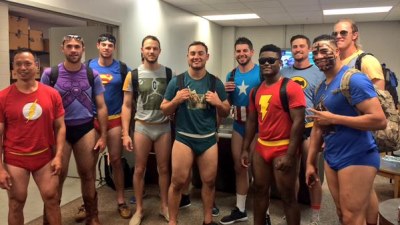 The photo, for those of you who don’t follow professional baseball, shows members of the New York Mets’ rookie class of 2015 walking around in their briefs underwear. The New York Daily News tells us more: “Noah Syndergaard walked around the Mets clubhouse Sunday evening looking for his hammer. The big right-hander is nicknamed Thor – and like other rookies he was given a set of Underoos to wear as part of the Mets rookie dress up. Syndergaard wore He-Man from Masters of the Universe, but did have Thor’s hammer as an accessory.”

The report adds: “The 6-foot-6 Scandinavian-looking righthander owned it. He marched out of the clubhouse with his fellow rookies – all dressed in superhero and Star Wars themed T-shirts and underwear. Rookie catcher Kevin Plawecki was dressed as Captain America, outfielder Michael Conforto had on Ewok Underroos, and Long Island lefty Steven Matz was in the Superman undergarments.”

For more hot Mets, go check out our earlier post on David Wright Going Shirtless. Now, aside from those already mentioned, the other underwear-clad rookies are: Sean Gilmartin in Skeletor underwear, Erik Goeddel in Boba Fett, Dilson Herrera in Shazam, Logan Verrett in Batman, Hansel Robles in Darth Vader, and Savannah Sand Gnats manager Jose Leger in The Flash.

It would be fun to revisit these images a few years from now — maybe 3-5 years — to see who among these rookies have become big stars of the big league. Syndergaard, no doubt, is on his way to baseball stardom but who among his fellow rookies will join him there?

By the by, the idea to dress the boys in their underoos apparently came from veteran outfielder Curtis Granderson. From the NY Daily news:

“We originally thought cheerleaders, but then time went by and we didn’t go with that,” Granderson said. “The other idea was underwear model and then (clubhouse manager) Kevin Kierst suggested UnderRoos.

“We had a lot of rookies, so it worked out they had enough,” Granderson said.
…
Granderson said he was Pocahontas when he was a rookie and had fond memories of the experience.

Unfortunately, we can’t find a photo of Curtis dressed up as Pocahontas but check out these hazing photos of the NY Mets Rookie Class of 2013: 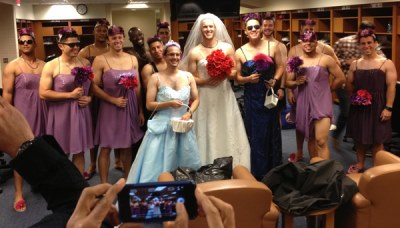 Kinda gay, no? Hehe. The same may be said for this photo of the Rookie Class of 2014: 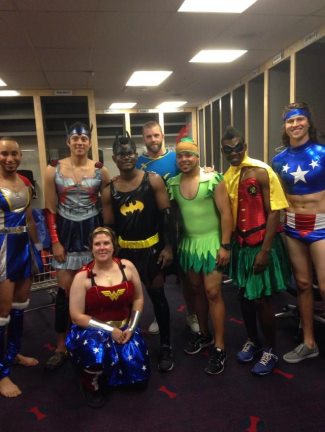 Didn’t we tell you that baseball is so gay? Hehehe. Anyhoo, let’s end this post with another photo of the NY Mets Rookie Class of 2015: 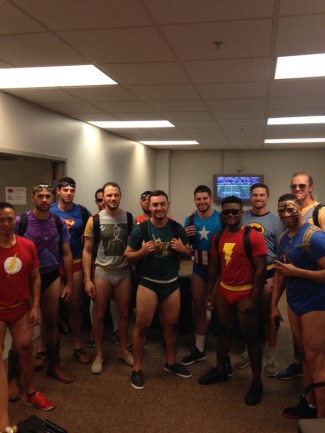 Want more baseball players underwear? Go check out a post we published way back in 2013: Baseball Players as Underwear Models.