Barrett Foa Boyfriend, Shirtless, and Underwear Photos (2020 Update). Nearly six years later, we are updating this post which we posted back in July 2014 to note that Kevin is correct in saying that the NCIS actor is a friend of Dorothy. Apparently, Barrett came out a year ago on his Instagram page (which you might want to follow @barrettfoa).

Here’s what he wrote: “Tonight I will guest star on one of my favorite shows of all time. Tonight I will kiss a man on national broadcast television and not be embarrassed or scared or ashamed in a way that my younger, dumber, more inner-homophobic self would have been. Tonight I am an out, proud gay man playing an out, proud gay man. Tonight I get to be a part of something big and hilarious and significant and influential and ground breaking and ridiculous and fantastic and silly and important. Tonight I am one step closer to myself.”

Barrett Foa Boyfriend? Is he dating anyone at the moment? We do not know at this point but we will update this post when we find out. Meantime, here are some shirtless photos of the actor we grabbed from his account. 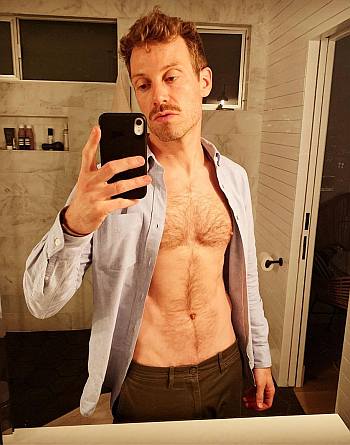 Barrett with some pals. Maybe one of them is his beau? Just asking. 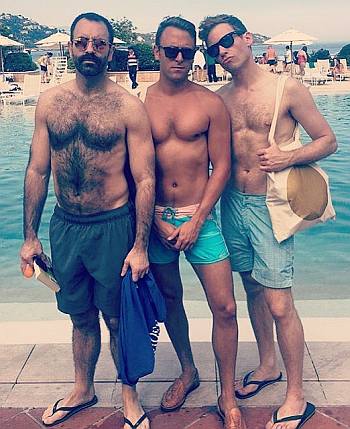 …..
Is NCIS actor Barrett Foa gay? If you ask our friend Kevin he’d say, “Of course he is! Didn’t you know that he is a theater guy before he made it to your teevee? Ask Kathy Griffin about them theater actors. She says those dudes are friends of Dorothy while them stage hands and stage managers are lesbians.” 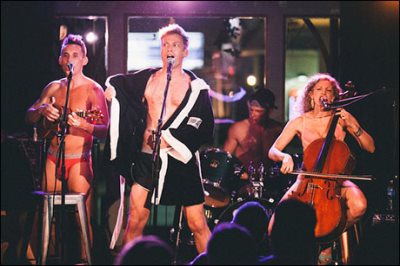 On the other hand if you ask the denizens of gay-or-straight.com, you will find a mixed reaction but they will ultimately come down to the conclusion that he is straight.

Meanwhile, if you ask Google, it will give you a hint hint, wink wink by autosuggesting that you should search for “Barrett Foa boyfriend”. It will also tell you to search “Barrett Foa dating” and it will come up with this pic of Barrett with our favorite out actor Cheyenne Jackson. 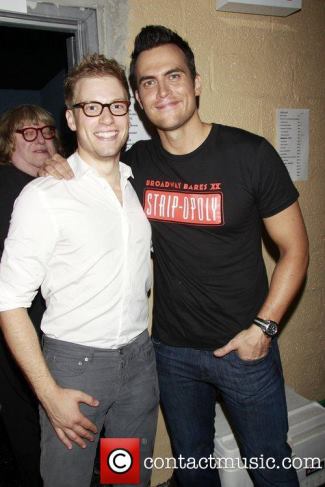 Either the Google gods are trolling us or maybe they are telling us something that the two gorgeous actors are not acknowledging in public. They do look good together don’t they?

Anyhoo, enough with our silly speculations. Speculation is fun but it can get tiresome and ridiculous. Straight or not, gay or not Barrett is talented and cool and that’s all that matters. So let’s move on to more meaty/serious topics such as ….. Barrett’s thoughts on global warming? Nah. Not that serious! We’re talking about his shirtless and underwear photos. Haha. Yeah, we are that shallow here at Famewatcher. You should know already that we’re all about underoos and shirtlessness. Anyhoo, here’s a shirtless Barrett up a tree with a guy we don’t know. 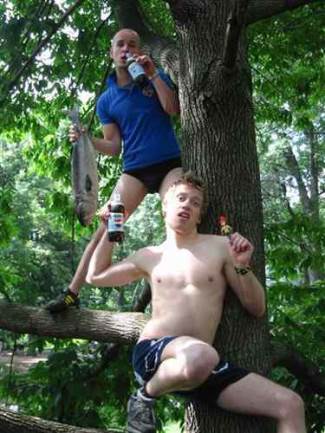 Does we wear boxers or briefs? He’s wearing boxers in this photo from a Broadway Bares event. Barrett as a boxer singing “Stronger” with The Skivvies. Check out a video of the performance below. Fashion designers should bring back the short shorts for men, no? [Sorry, we had to delete the photos.]

Recently, Barrett and his NCIS co-star Renée Felice Smith did an Ask Me Anything (AMA) interview on Reddit. Here’s an excerpt of the Q&A:

What are your favourite broadway musicals?
OMG, where to begin? I would say THE MUSIC MAN (I got to tackle to role of Harold Hill last summer in Connecticut and had a BLAST! – I’ve been in that show 3 times before – in the chorus, when I was around 19/20. It’s such a well written piece of art.) A LITTLE NIGHT MUSIC, SWEENEY TODD, SUNDAY IN THE PARK WITH GEORGE (can you tell there is a Sondheim theme here?) A CHORUS LINE is pretty fantastic as well. What are yours?

The cast seems like they’re tight knit in real life as well. Any truth to that?
Truth. We just went to COD (Chris O’Donnell)’s house for the Oscars – the whole cast and Dani and ECO’s newborns! so great.

Any pranks on the set? I feel like someone has to be the class clown…
Pranks – We played a great one on LL. We had a copy of Men’s Fitness when COD was on the cover and we pasted a fake ad on the back cover (our props guys made it) with LL promoting some kind of Protein Powder. He FREAKED OUT! it was hilarous. The whole cast and crew was in stitches. LL was a good sport.

Are you partial to shorts in real life as well?
I don’t like shorts that much. Also, it’s super cold on set (about 60 degrees! to keep the cast and crew moving!) so I’m always COLD.

How were your auditions for NCIS:LA?
I actually auditioned for the role of Nate but didn’t get it! Then they added the character of Eric and asked me to be the tech guy on the show. And look how it’s grown! 5 years later…..!

Do you get recognized on the street at all? If so what is the best and/or worst experience that you’ve had?
Happens a lot at airports, airplanes and supermarkets. Places where there are lines. It’s fun. Everyone’s been very cool and respectful. Sometimes I forget that I’m on a TV show that is watched by 18 million people in america each week. So sometimes I’m just being my dumb boring self and picking my nose or whatever (not really) and someone comes up to me. It is jarring, and it is always welcomed. If you ever see me in person, don’t be shy and say HI! I don’t bite!

What is the best advice ever given to you?
Preparation is key! also passion and research. I love all the prep work before you hit the stage (or the set!) It really informs the world and the character!