Thierry Henry Andrea Rajacic: Girlfriend, When’s The Wedding? Hey look who’s got himself a girlfriend? Yup that’s football star Thierry Henry with his new mystery girl, a model known only as Andrea who’s been credited for helping Thierry get back to form. Thierry and Andrea, sitting on a tree. 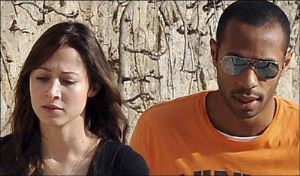 Thierry Henry Andrea Rajacic Update (posted 17 May 2011): As one of you have noted in the comments, the full name of Thierry’s no-longer-mystery-girlfriend is Andrea Rajacic. She’s originally from Sarajevo, she’s a model, and she’s reportedly the daughter of a famous plastic surgeon, Nebojsa Rajačić. She is apparently fluent in English, Spanish, Arabic, Italian, and – we presume – the language they speak in Sarajevo. She also finished management in some school in the United States. Now, she’s one of the countless WAGs that British tabloids like to follow and love to write about.

Here’s our Andrea having a good time with the wife of Bakary Sagna. 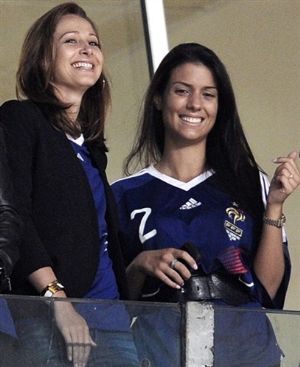 Andrea with bad-ass questionably fashionable boots with ten-inch heels. Okay, those heels are not ten inches but they should be banned because they’re bad for women’s health. Hey Andrea, haven’t you heard of the bad effects of high heels? They give you bad bad bunions. That Christian Louboutin designer fellow is destroying women’s feet and deserves to be in jail. Hahaha. 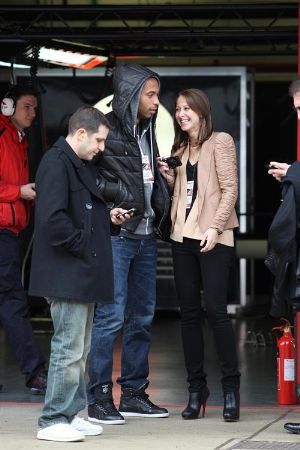 Anyhoo, Thierry and Andrea reportedly met and fell in love in Spain. Did we say they’re in love? They’re so in love they don’t mind showing their “fucking private business” to the world. To be fair, this appears to be a paparazzi photo so this private moment was actually made public by the papz and by silly bloggers like us who can’t help but blog about it. Seriously, two lovers – celebrities at that – doing rub-a-dub-dub in a tub? Are you not going to blog about that if you’re a blogger. Update: Sorry, we had to delete the photo.

This is how you do it in the bathtub girls, wrap your legs around your man.

Some internet sources claim that these two were engaged and planned to get married in June 2010. Maybe they had a secret wedding because, as of this update, we can’t find any source that they indeed got married. They’re still together though.