Stuart Reardon is a Leather Daddy. We are updating this post to note that our Stuart is now a daddy. Based on his Instagram posts, he is the proud father of a young boy who was born last year.

For those wondering, Stuart Reardon’s partner is Emma Louise Hayes. We’re not sure the two already tied the knot but an an article on red219.wordpress.com which features the rugby star in an interview referred to Emma as his fiancee. Anyhoo, here’s a photo of the happy couple which we grabbed from Stu’s Instagram (follow him @stureardon): 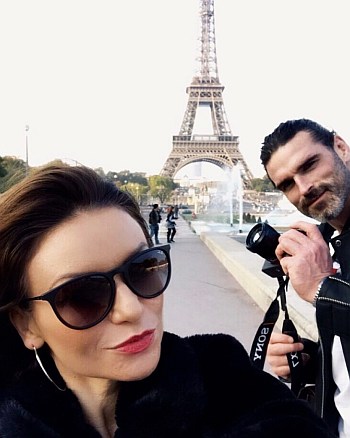 Stuart has evolved his image and is going for the biker leather daddy look which suits him very, very nicely indeed. 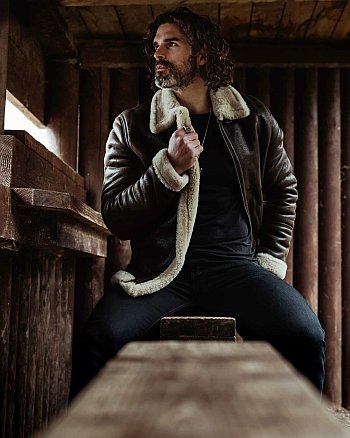 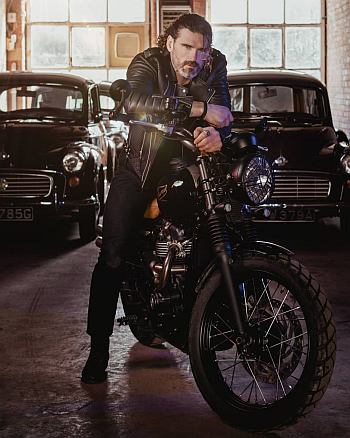 …..
Stuart Reardon Rugby Player as Underwear Model (Posted 6 May 2013). Time for another rugby rocking a side gig as an underwear model. This time, let’s focus on the awesomeness of English rugby player Stuart Reardon and his incomparable modeling photos for various underwear brands. The 31-year-old rugby hunk currently plays for the North Wales Crusaders. 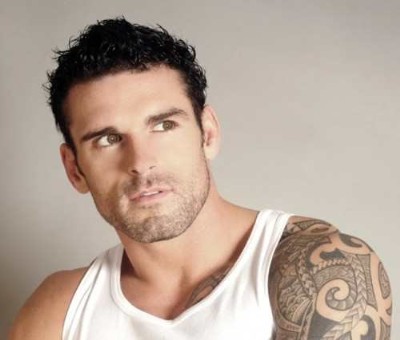 In the past, he played for various clubs such as the Bradford Bulls, Salford City Reds, Crusaders, and AS Carcassonne which is his most recent team before he joined the North Wales Crusaders.

Playing rugby would be Stuart’s main bread and butter but he does some modeling on the side which is why you must have seen him posing in various ways, in various states of undress, and wearing various brands like the jockstrap-style Todger Strapper he’s wearing above. What’s a todger, you ask? According to urbandictionary.com, it’s a British slang for the male you-know-what. Clever brand name, huh? [Update: Sorry, we had to delete the pic.]

Now, on to the modeling pics. Our rugby hunk being contemplative while wearing a pair of Todd Sanfield, an American label started by a male model named Todd Sanfield. 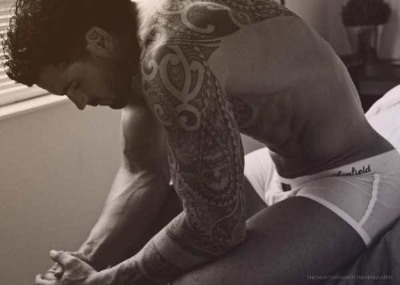 Come to think of it, we think Stuart Reardon should start his own underwear brand. With all the underwear brands and style he wore, he’d be an expert in determining which is good or bad, which works or does not work, which looks good on a man. We suggest he follows Todd Sanfield’s example and use his own name as the label. Can you imagine a guy saying “I’m wearing my Stuart Reardon underwear!” If that doesn’t sound badass, we don’t know what does.

Anyhoo, here’s another photo of our Stu in his boxer briefs playing chess with a dude also in his undies. 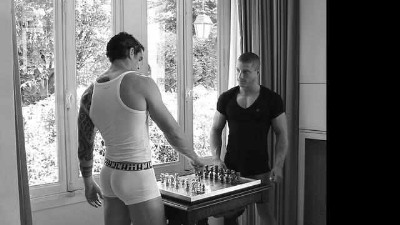 Let’s end this post with our rugby hunk in jeans with a peekabo Calvin Klein. 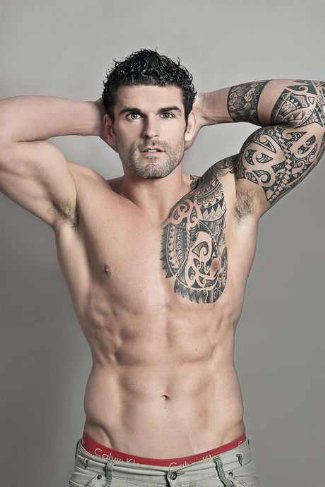 A tattooed Stuart rises from the sea like Poseidon. 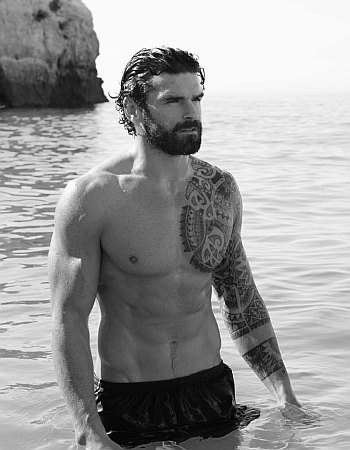 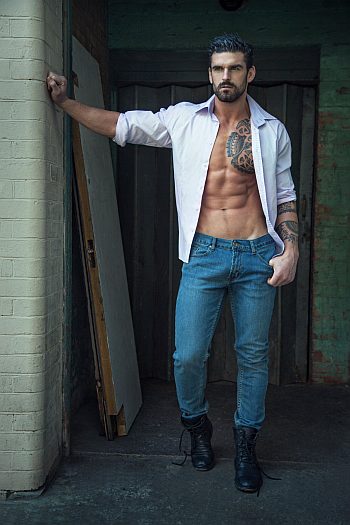 Because we’re all about men in briefs-style swimwear, we gotta say the pic below is our favorite. 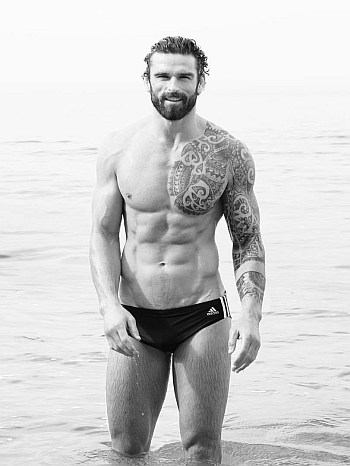 …..
Stuart Reardon Tattoos. What does his tattoo/s mean? Stuart talks about his tattoo in an interview with theinkonme.com. Here’s an excerpt:

How would you describe your style?
This tattoo design style is a mixture of tribal Samoan and Aztec tribal patterns. I explained the design and look I wanted, then let tattooist Roy Preistly do his job.

What has been your inspiration for getting them?
I guess I always wanted to get tattooed from a young age. When I made up my mind and decided on my design, I sought out a good tattooist then got it done. A time ago, I was getting over bad injuries, putting my energy into a fantastic tattoo helped take my mind off of the stress.

What’s your favorite piece?
I actually only have one, though it’s very large, made of different pieces, the whole design is my favorite.

Will you be getting anymore?
I am not sure if I am getting anymore. I find having it somewhat addictive. It’s always tempting to get adjustment or edits to make the tattoo look better. Right now, I can’t say for certain.

Now, its our turn to ask you two questions fellow Famewatchers: Which of the above is your favorite Stuart Reardon underwear photo? Secondly, do you agree with our suggestion that he should start his own eponymous underwear label?