Does Robbie Rogers have a boyfriend? Yes he does! And the boyfriend is as dreamy and as shaggable as the LA Galaxy soccer player. Robbie’s beau is Greg Berlanti. According to wikipedia, Greg is a writer/director/producer and is one of the co-creators of our favorite TV show, Arrow. Here’s a photo of Robbie and Greg playing cop and cop. 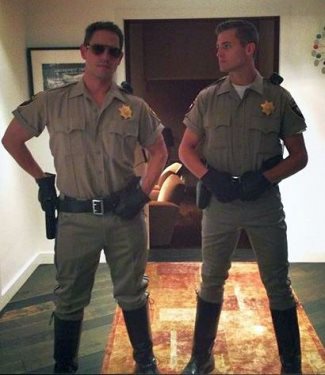 It would have been more exciting if they’re playing cops and robbers, no? Arrest me officer, I did something wrong! I want to be punished by you!

Looks like these two don’t have any problem sharing household chores so we won’t be surprised if they end up getting married. They sure don’t need to Rachael Ray to navigate the kitchen. Who’s the better cook? 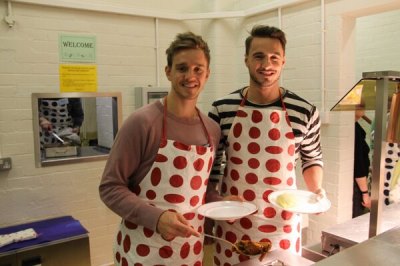 Awww! How cute are these two together? But who’s the better swimmer? 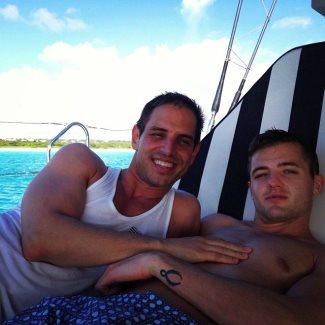 Who looks better shirtless: Greg or Robbie? Unfortunately, we can’t find a shirtless pic of the Hollywood executive so we will have to give the point to Robbie.

By the way, before we forget, Greg is apparently also behind the new superhero series The Flash which stars Grant Gustin and which will air on The CW.

So how is Robbie Rogers doing now after his coming out a year ago? Well, it looks like his decision to come worked out for him just fine. Aside from getting himself a Hollywood boyfriend and living freely as a gay man, he’s also been hired to play for LA Galaxy. He’s also earned the distinction as the first openly gay player to play for a North American professional sports league. How is he doing in LA Galaxy? He’s doing well according to rantsports.com:

Tonight’s match was embarrassing to the Los Angeles Galaxy, but it was able to tie up the match thanks to a brilliant performance by Rogers. He was subbed in the 43rd minute in place of an injured Dan Gargan, and he hit the ground running. He was aggressive and clean, and he was the reason the club was able to tie the match. Yes, Landon Donovan made the goal, but he would not have been able to without Rogers’ beautiful cross.
…
Rogers has dealt with a lot of criticism since he joined the Galaxy. He’s unfairly compared to the departed Magee, and I think he faces harsher criticism because of it. Magee was out due to injury in today’s match, but in peak fitness Magee is an incredible striker. Rogers came in as a midfielder, but as he began training with LA Galaxy II, Bruce Arena put him in as a right back, and he did surprisingly well. This may not be Rogers’ permanent position, but it was a position that needed to be filled because of shaky back line. Rogers stepped up and performed his best.

Yay for Robbie! We hope he continues to do well in the sport he loves!