Chadwick Boseman Shirtless. Those of you who are looking for a rising star in Hollywood should check out Chadwick Boseman. He’s not exactly a newcomer since he’s been in the biz since 2003 but his star has been especially shining bright these past few years. 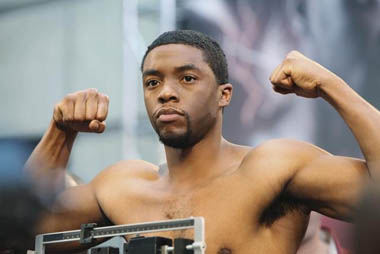 In 2013 Chadwick headlined the movie 42 in which he played Jackie Robinson the first black man to join Major League Baseball. The film did amazingly well in the box office with a $95 million take. In an interview with blackamericaweb.com, Chadwick talks about his role as Jackie Robinson and meeting the iconic baseballer’s widow:

Skip: So Jackie Robinson’s widow – she give you some pressure?
Chadwick: Oh, absolutely.
Loni: Was she on the set?
Chadwick: She came to the set, yes. She didn’t come every day. She visited. She consulted even when the script was being written. When I met her, I met her down at their offices of the Jackie Robinson Foundation, on Varick Street. (Editor’s Note: In NYC) You feel like you’re about to meet the Queen. She’s regal. And so the first thing she said to me was if we had made this movie when I wanted to make this movie, Sidney Poitier would have played your role.
Loni: Oh, wow.
Skip: No pressure.
Chadwick: OK, then Denzel was supposed to play it. And now we ended up with you.
Loni: Wow.
Chadwick: So who are you? So that’s just the beginning of the conversation.
Loni: Did she see the finished product of the movie? What did she say afterwards?
Chadwick: I wasn’t with her when she saw the finished product the first time. I saw the movie last week at the White House. But in both cases, told me she was completely satisfied, hugged me, was overjoyed, she told us we did a great job. She said basically that not only did it help her remember the difficult part of that time, it helped her remember the joy of that time. It was the most fulfilling part of this project to see her satisfied with it.

MovieBoxOfficeWatchers, it might interest you to know that, according to Box Office Mojo, 42 is the second highest earning baseball movie after A League of Their Own (box office take: $107.5 million). We’re surprised to find out that 42 earned more than Brad Pitt’s Moneyball (box office take: $75.6 million) and Bruce Willis’ Field of Dreams ($64.4).

This year, Chadwick is playing another lead role as James Brown in the upcoming movie Get On Up which is scheduled for release on 01 August 2014. Does Chadwick have another hit movie coming? We certainly hope so. We hope he becomes the next Denzel Washington or Sidney Poitier in Hollywood. 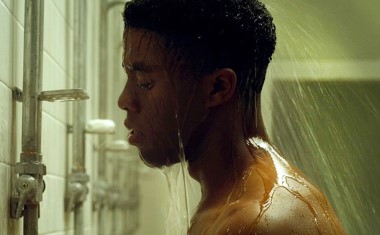 Here’s our Chadwick on The Ellen Degeneres Show talking about his role as James Brown as well as another movie, Draft Day, where he co-stars with Kevin Costner. Getting interviewed on Ellen is THE sign that an actor has arrived, isn’t it? Yay for Chad!

Chadwick Robinson Relationship Status: Is Chadwick dating anyone? Does he have a girlfriend or a wife? Lots of questions, eh? Unfortunately, we don’t have the answer for you. We’re surprised that the internetz does not say anything about his relationship status. Maybe he’s keeping it private. Anyhoo, if some of you know anything about whether our Chad is seeing anyone, do tell in the comments. Danke!

Want more black actors in Hollywood, check out the Shirtless Kevin Hart in His Underwear.