Red Pants for Girls. Girls wearing red pants is kinda cool. It’s a fashion style for those who’d want to go for the Santa Claus look without overdoing it. So fashionistas, how about following Agyness Deyn’s example by dressing up in a really red pants and pairing it with a really red shoes? You’ll be bringing the holiday cheer to whoever you’re going to meet. Ho Ho Ho. 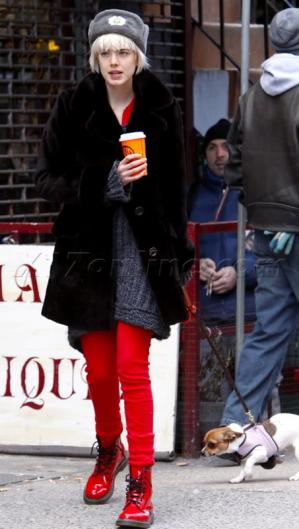 If you want to look super cool, top your red jeans and red shoes combo with either a fur coat (as above) or a leather jacket (as below). 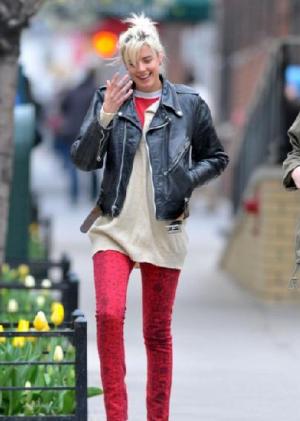 What if you’re a dude and would like to wear red pants too? No problem, watch out for our upcoming post about that. It’s going to be about your favorite male celebrities in red jeans.

Other female celebrities who apparently also love them their red pants include the ageless beauty that is Demi Moore. 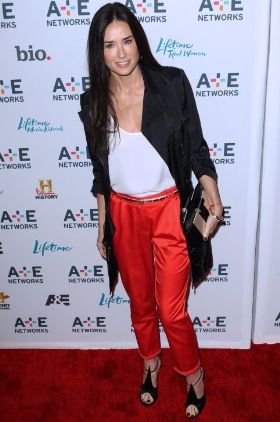 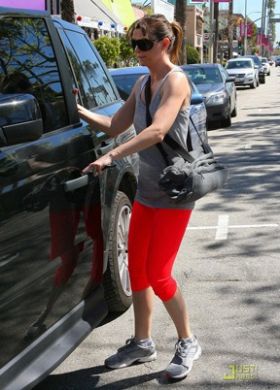 Finally, if you want more red pants for girls go check out our post on Female Celebrities in Red Pants?

FROM THE ARCHIVES: Previous Posts on Agyness Deyn Other Than Her Fabulous Red Pants for Girls

First of all, look who’s got herself a new boyfriend? It’s Agyness Deyn. Good for her. So who’s that dude she is locking lips with? That’s Alex Greenwald of the band Phantom Planet. Hey, you two! We know you’re in love but go and get yourself a room!

Supermodel Ageyness Deyn rules the runway in New York. What do you think of her pretty cool headgear. We think she should lend at least one of them, particularly the second one, to Donald Trump. Now, we decided to do this update to answer your Google queries such as:

agyness deyn kissing girl: Well, we don’t know if the British model is into kissing girls but you know who would like to give her some girl kissing? No surprise, it’s Katy “I Kissed A Girl” Perry. Here’s what the American singer said in an interview with The Sunday Times: “I have talked a lot about wanting to kiss girls, but am I a lesbian? No. It’s just a kiss. I would like to get it on with Agyness Deyn. She’s a little punk-rock Lolita. Beautiful face, beautiful shoulders. I look at her and I think, ‘Ooh, I’m so turned on. What’s happening?'”

is alex greenwald married: No. Not that we know of anyway. Probably you can tell us?