Celebrity Two-Piece Bikini Swimsuits: Beach Girls of Summer. Looking for pictures of your favorite female celebrities in their bikini swimsuits? Well, here’s a compilation of our previous posts of famous girls having fun at the beach in their swimwear. Who among these bikini-clad ladies is your favorite?

While we were not looking Anna Paquin, the little girl introduced to movie goers in the early 1990s movie, The Piano, grew up to be a bikini-wearing young lady. By the way, did this girl win an Academy Award for her The Piano role? We’re getting older and are losing our memories. More pics of Anna enjoying herself at the beach.

Our next entry to the list of Celebrity Two-Piece Bikini Girls is Shayne Lamas. Shayne is the daughter of soap opera star Lorenzo Lamas. She followed her father’s footsteps and has some acting credits to her name. She’s also the winner of the twelfth season of the popular television reality show, The Bachelor, with Matt Grant proposing to her during the show’s finale.

Shayne appears to be really enjoying herself in these photos, no? Any luck catching a big fish, Shayne Dahl? None? Well, at least you look like you’re having fun. 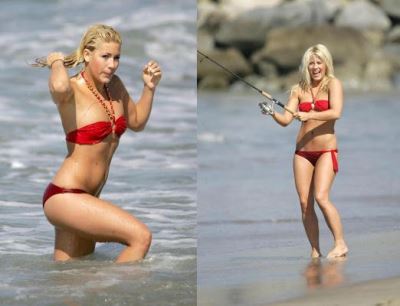 Third in our list of Hollywood beach girls who rock their celebrity two-piece bikini swimsuits is reality television star Kristin Cavallari. Kristin showed off her banging bikini body during an appearance at the Liquid Pool in Las Vegas’s CityCenter. 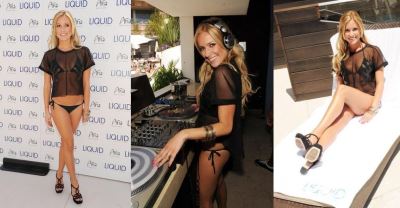 According to People Magazine, Kristin was in Las Vegas to host a party:

Kristin Cavallari broke out her bikini yesterday to host a party at the Liquid Pool in Las Vegas’s CityCenter. She covered up with a mesh shirt while posing for photos, then stripped down to her two-piece to sip drinks and play with water guns once inside. Kristin’s following in the footsteps of her costar from The Hills, Heidi Montag, who showed off her post-surgery figure at a bash of her own two weekends ago. Heidi’s transformed body and marriage to Spencer is still a hot topic for their MTV cast-mates, with Kristin saying, “It’s not my body. If she’s happy, that’s all that matters. . . Nothing shocks me about them anymore. It’s one thing after another.”

Well, we aren’t shocked that Kristin isn’t shocked by the antics of Heidi and Spencer. Anyhoo, check out the rest of Kristin’s underwear photos in Vegas.

Birthday Girl AnnaLynne McCord in Her Celebrity Two-Piece Bikini Swimsuit: AnnaLynne McCord aka Naomi Clark of the not-so-hit show 90210 celebrates her 22nd birthday by frolicking in the beach with her sisters. That’s sister Angel she’s running against with. We think they’re doing a 100-meter dash competition. 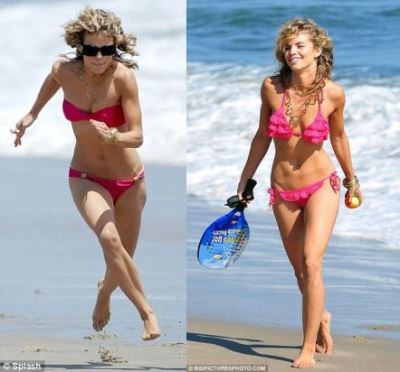 Now, AnnaLynne darling, you look good in them bikinis but you should ditch that silly necklace. Don’t you know that that could drag you down under the sea. Seriously.

And where’s your Twilight beau Kellan Lutz? You should have invited him to the party and made him wear a skimpy speedo like baseball star Gabe Kapler. Or a mankini like John Mayer.

Annalynne McCord in Wetsuit: Matt Lanter isn’t the only 90210 star who looks great in a wetsuit [See Matt Lanter’s wetsuit]. Check out his co-star Annalynne McCord who’s looking pretty cool in her multi-colored wetsuit. Annalynne is shooting a scene for the CW television show. 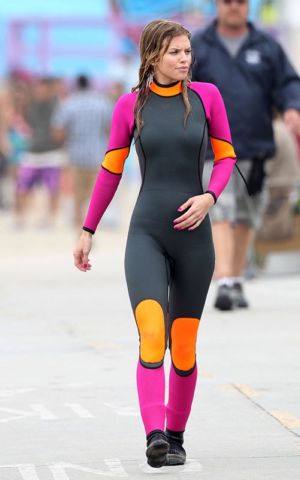 Aside from Matt and Annalynne, another celebrity who rocks his surf wetsuit is Austin Nichols.

Theodora Richards. Who is less healthy? A really, really skinny girl like Theodora Richards aka the daughter of rocker Keith Richards? Or the curvy, okay let’s say a little fat, Jessica Simpson? We say a fat Jessica is healthier than a skinny Theodora. 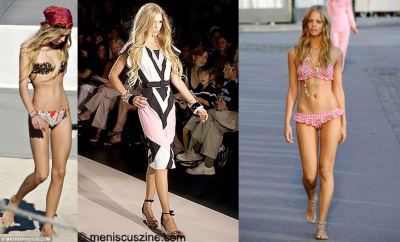 Fortunately for her own sake, Theodora isn’t always sticky thin because she looks better in her other photos.